C–H activating methane, ethane and propane in a flow reactor shows that it’s possible to use gaseous hydrocarbons as reagents in organic synthesis 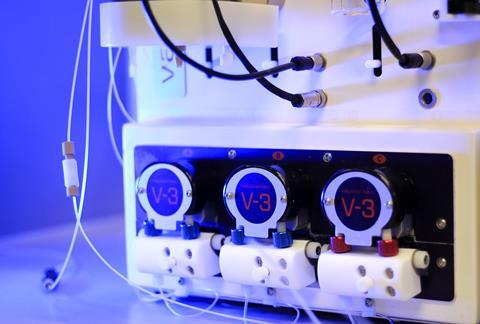 Chemists have discovered a tungsten photocatalyst that breaks the nearly inert carbon–hydrogen bonds of methane and other small alkanes at room temperature. The gaseous hydrocarbons are fed into a flow reactor where they react with alkenes, making this a rare example of directly using natural gases as reagents. ‘This could open up an entire new way of looking at how to introduce small alkyl fragments into structures via a relatively simple method,’ says the study’s leader, Timothy Noël from Eindhoven University of Technology in the Netherlands.

Methane and other light hydrocarbons are usually disregarded as substrates for C–H activation reactions, for two reasons: they are gases – inconvenient to work with – and they are nearly inert towards any but the harshest conditions. ‘You have two strategies when it comes to converting small alkanes into value-added molecules,’ explains Noël. ‘One is to use brute force – heating them up to, at least from an organic chemist’s perspective, insane temperatures, 500°C or more.’

The other is to convert them into haloalkanes, which again requires extreme temperatures, and toxic and corrosive chlorine or bromine gas. The haloalkanes are then transformed into organometallic reagents and combined with alkenes in a conjugate addition. 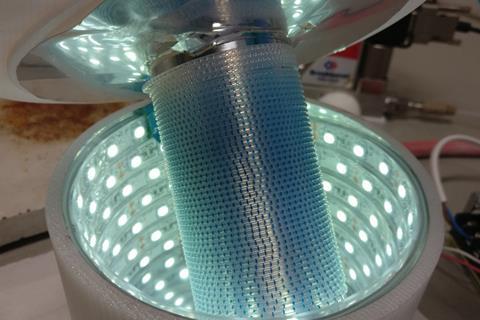 The reaction mixture is irradiated in this homemade device

‘We bypass all these steps and pull off one of the hydrogens [from methane, ethane, propane or isobutane] with this photocatalyst,’ says Noël about a cheap tungsten–oxygen cluster that creates alkyl radicals at room temperature. In a conjugate addition, the radicals are then trapped by activated alkenes.

In alkanes with more than one type of C–H bond, ie propane and isobutane, the catalyst creates mostly the more stable secondary and tertiary radical, respectively. Yields for the larger light alkanes range from 75 to 90%, while reactions with methane yield a more moderate 50%.

‘This is a truly important finding,’ says Zhiwei Zou from ShanghaiTech University in China, who in 2018 published a study on photocatalytic methane functionalisation. He points out that this is ‘the first time someone was able to use this decatungstate photocatalyst to activate the C–H bond of methane’.

Noël credits his team’s success partially to their willingness to embrace flow chemistry. ‘Our group specialises in those reagents that nobody wants to work with because they are either a gas, and you cannot treat them very well in a batch reactor, … hazardous reagents,’ he says. A commercial flow reactor holds high pressures – up to 45 bar in the case of methane – creating a homogeneous system that brings the gas and the catalyst into close contact.

Given how cheap and readily available methane and other light alkanes are, Noël thinks they have a lot of untapped potential as starting materials. And the flow process lends itself to being scaled up, Zou says.

One of the things Noël and colleagues now want to work on to make the process industry-applicable is their solvent system. Their catalyst is so powerful that it also C–H activates the solvent’s bonds. ‘For methane [activation] we need deuterated acetonitrile, because with regular acetonitrile … you have byproduct formation,’ Noël explains.

‘There are a lot of interesting possibilities,’ says Zou. For example, ‘is it possible to reverse the selectivity, so to activate primary over secondary and tertiary C–H bonds?’