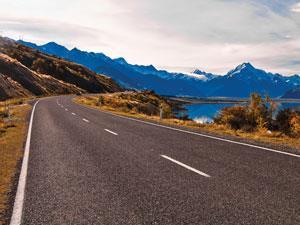 A molecule that comes from plants and trees could lead to cheaper and more environmentally friendly roads and bike paths, according to Ted Sleghek, a senior scientist with the non-profit TNO in the Netherlands.

Sleghek said that lignin extracted from plants is a renewable resource removed as waste during the paper-making process and can be substituted for some of the bitumen that is currently the main binding ingredient in tarmac and roof sealants. ‘The market is asking for this type of modification because the quality of bitumen is going down and the price is going up,’ Sleghek explained. ‘In order to create bitumen which is fit to be applied in roads, you have to modify it anyway, so why not modify it with natural components,’ he said.

The cost of bitumen fluctuates with the price of crude oil, but it currently stands at between €500–600/tonne (£365–439/tonne), according to Sleghek. In addition, bitumen must be modified with polymers like atactic polypropylene or styrene-butadiene-styrene, which impart plastic and rubber qualities to tarmac, respectively. These polymers, which are also crude oil-based, cost €2–3/kg.

Sleghek pointed out that millions of tonnes of lignin are available and there are several different ways to extract it cheaply. One of the most inexpensive and popular methods is the kraft chemical pulping process, whereby a strong alkali is used with a sodium sulfide catalyst to separate lignin from the cellulose fibre, Sleghek says.

Sleghek’s reported at the American Chemical Society’s conference in Denver, Colorado on 23 March, that his team has created several different lignin–bitumen mixtures. These can make tarmac harder in warm weather, minimising rutting and general wear and tear, or tackier in cold weather to prevent rocks and pebbles from coming loose from brittle roads and damaging cars.

The actual details of how Sleghek and his colleagues combine the lignin and the bitumen to get their desired product are proprietary. However, Sleghek said the trick is to mix the lignin in such a way that it ‘becomes one with the bitumen’ and no longer exists as singular particles.

To prevent biodegradation, the lignin is encapsulated in bitumen. ‘So far, we haven’t seen any fungus,’ Sleghek said. However, he noted that increasing the amount of lignin could pose decay issues.

To test their product’s real-world application, Sleghek and his collaborators intend to construct a 100m bicycle path this year using one of their lignin-based asphalt mixtures. ‘There are already a few locations and local governments who would like to participate in this,’ Sleghek stated.