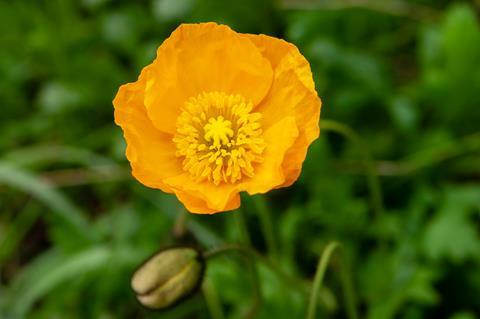 Scientists have reported the first total synthesis of the pigments responsible for the yellow colour in Iceland poppies, eight decades after they were originally isolated.1 The syntheses mimic the unique cascade processes that happen in poppies and by generating the pigments in excellent yields they open the door to colour–scent studies.

Robert Robinson first isolated the pigments responsible for the orange and yellow colours of Iceland poppies in the 1930s, although his team was unable to identify the compounds given the limited analytical techniques at its disposal.2 Robinson, who went on to win the 1947 Nobel prize in chemistry, termed these pigments nudicaulins after the scientific name of the flower, Papaver nudicaule. The correct structural assignment of nudicaulins continued to elude scientists for decades.

The function of these pigments – to attract pollinators – has meant that nudicaulins have recently been attracting interest from scientists. In 2013 Bernd Schneider from the Max Planck Institute for Chemical Ecology in Germany and his co-workers finally determined the nudicaulins structures.3 Now, some 80 years after they were first reported, Jonathan Sperry and Rory Devlin from the University of Auckland, New Zealand, have achieved the first total synthesis of these natural products through an efficient biomimetic pathway. 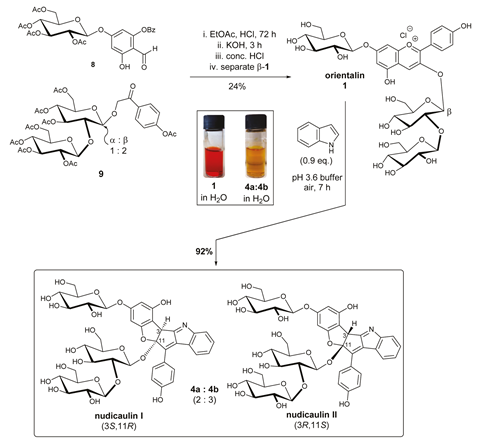 Nudicaulins are flavoalkaloids, a rare class of natural products with very complex structures. Sperry explains that this complexity comes from the biosyntheses of alkaloids (nitrogen rich organic products) and flavonoids (polycyclic phenolic compounds) converging. ‘In the case of the nudicaulins, this leads to a heteroaromatic framework never before seen in nature,’ says Sperry. Nudicaulins possess an unusual diglycosylated pentacyclic scaffold, which contains a cis-fused 5,5-ring system and a fused indole unit.

The substitution pattern of the nudicaulins corresponds to that seen in orientalin, an anthocyanin responsible for the colour of red poppies. Nudicaulins also contain a crucial indole unit. These clues led other researchers to suggest nudicaulin biosynthesis involved a reaction between indole and a precursor to orientalin. ‘We found that by mimicking this biosynthetic cascade in the laboratory, we could access the nudicaulins from readily available precursors,’ says Sperry. The final step in Sperry and Devlin’s process fuses indole with orientalin in a unique cascade sequence that leads to nudicaulins I and II in 92% yield, verifying the biosynthetic pathway.

Schneider, who was part of the team that identified the nudicaulins, is impressed with the synthesis. ‘The ease of the final biomimetic step in the synthesis of nudicaulins has potential to be applied for the synthesis of a plethora of nudicaulin-related structures,’ says Schneider. He says having a synthetic route to the compounds will make it easier for researchers to study the relationship between the indole scent component and the overall visual attraction of nudicaulins. ‘Bees could be trained on the colour of the mixture or individual nudicaulins I and II.’