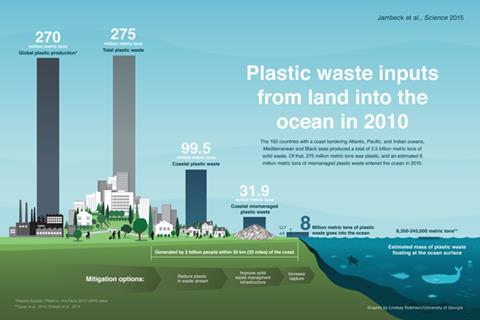 The amount of plastic waste entering the world’s oceans every year could be as much as 8 million tonnes – 3% of the plastic waste produced every year, according to new research findings released on 12 February at the American Association for the Advancement of Science’s annual meeting in San Jose, California.

The figure is one to three orders of magnitude higher than reports of the amount of floating plastic waste in the world’s seas. ‘That is the same as five bags filled with plastic for every foot of coastline in the world,’ says Jenna Jambeck, from the University of Georgia, US, and one of the authors of the study. ‘And it can get worse. If we assume a business as usual projection with growing populations, increasing plastic consumption and increased waste generation by 2025 this number doubles. We may be adding 17.5 million tonnes per year.’

For the past 40 years reports of plastic waste in the oceans have been commonplace. While some effort has been made to gather and look at the waste circulating in the world’s seas, no rigorous assessment has been made of how much plastic is making its way from the land into the sea. Jambeck says that this is because, until very recently, there was simply no interest. Added to this, assembling the right team of scientists with the appropriate skills was difficult.

Jambeck and her colleagues came up with their figures by looking at the amount of plastic waste produced by communities living near the sea. The team drew on resources such as the World Bank’s recent audit of global waste and estimate that the 192 countries with a coastline, with a combined population of 6.4 billion people, generated 275 million tonnes of plastic waste in 2010. They then looked at just the people living 50km from the coast in these countries, reasoning that they would be the most likely to contribute to plastics entering the world’s oceans.

Of the 99.5 million tonnes of plastic waste these people produced, around 31.9 million was classified as mismanaged, meaning it was dumped or poorly disposed of. Their model estimates that this mismanaged rubbish, combined with litter, adds up to between 4.8 million and 12.7 million tonnes of plastic waste ending up in the world’s oceans every year. 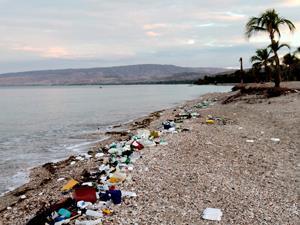 One of the other authors, Kara Lavender Law with the Sea Education Association in Massachusetts, says that these figures matter because of the effects of plastics on the marine ecosystem. This ultimately affects people who consume seafood, some of which may contain small pieces of plastics or microplastics. These plastics can contain additives that may be toxic and they can also act as chemical sponges, capturing persistent compounds such as polychlorinated biphenyls. ‘This study shows far more plastic is in the ocean than we thought, and we need to find it,’ she adds.

Of the top 20 plastic polluters all but one – the US – are emerging economies such as China, Indonesia and the Philippines. Jambeck says that their work is not about finger-pointing and adds that the best way to limit the amount of plastic entering the oceans is for these countries to develop proper waste management systems.

Steve Russell, vice president of the American Chemistry Council’s Plastics Division, says that used plastics should be treated as a valuable resource and be either recycled or recovered for their energy value. He notes that in 2011 many world plastic associations signed up to a document on best practice for plastic recycling and recovering. ‘The most important thing we can do right now is to keep all trash, including plastics, from getting into our oceans in the first place,’ Russell said in a statement.

Marcus Eriksen, co-founder of the 5 Gyres Institute in the US, and author on a paper that estimated the number of plastic particles in the world’s oceans, says that waste management infrastructure – albeit often informal – exists in all the top plastic polluting countries identified. He says that an issue not addressed in this study is product design, pointing out that products that are valuable to recyclers or waste pickers are less likely to end up in the sea.

‘Burdening developing countries with the cost of building waste management infrastructure is not a solution, whereas innovations in product and packaging design that favours incentivised recovery, and a phase out of single-use plastics, is proving to work where it’s implemented,’ Eriksen adds.