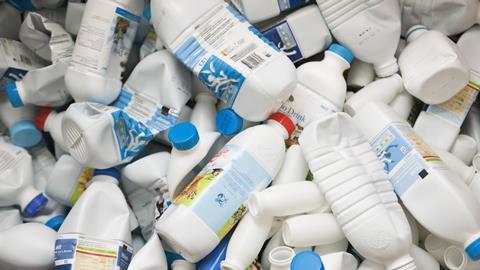 A one-pot method for converting polyethylenes into more valuable chemicals at low temperature has been demonstrated by researchers in the US. The early-stage research could potentially help tackle the Earth’s ever-growing mountain of waste plastic, and offers an alternative route to chemicals currently produced via energy-intensive processes that consume fossil fuels.

Plastics are a versatile class of materials with myriad applications, and today they are a ubiquitous and indispensable part of modern life. In 2015, global production of petroleum-based plastics was 380 million tonnes, and production is projected to double again within 20 years. However, their stability and chemical inertness also mean that they pose a significant waste problem because they can persist for hundreds of years when disposed of in landfill or in the environment. A 2017 study found that this was the fate of 79% of all plastic waste ever produced, with just 9% being recycled. Current industrial recycling methods typically involve simply washing the polymers before melting them down and reshaping them. However, these recycled plastics have inferior properties and lower value than virgin plastics. And while chemical recycling methods can, in principle, depolymerise some plastics to the monomer, this process is highly endothermic, posing a challenge for its economic viability.

Now, Susannah Scott of the University of California, Santa Barbara and colleagues have demonstrated the conversion of polyethylenes – which represent 36% of all plastic waste – to long chain alkylaromatic chemicals, which are more valuable than the original plastic. Alkylaromatics are currently produced mostly by reforming the crude oil fraction naphtha at 500–600˚C to produce a mixture called BTX (benzene-toluene-xylenes), which is then alkylated in a next step that uses a strong acid catalyst, generating further environmental issues in separation and waste disposal. The team’s new method involves direct conversion of polyethylenes to a mixture of linear alkylaromatics, using a platinum catalyst at a temperature of just 280°C.

The waste plastic is heated over a platinum catalyst, which breaks down the polymer chains to produce a range of alkylaromatic products.

The group discovered its process by chance when attempting a different reaction. They were initially puzzled by their results because the low temperatures used shouldn’t have been sufficient for aromatisation, which is highly endothermic. However, they realised that the hydrogen released by aromatisation was reacting with the polyethylene chains, promoting their breakdown into shorter chains. ‘[Complete] depolymerisation would take polyethylene back to ethylene, and that reaction would be strongly endothermic,’ explains Scott. ‘But we’re not going back to ethylene … you can think about taking the large molecules and cleaving them with hydrogen to get alkanes, and that’s an exothermic reaction. So coupling the reaction that produces the hydrogen with the reaction that consumes the hydrogen makes us nearly thermo-neutral.’

The researchers demonstrated the process on a sample of low density polyethylene plastic bag and a high density polyethylene bottle cap, producing a range of linear alkylaromatics that could have uses ranging from surfactants and lubricants to refrigerants and insulating oils. They are working to develop a more scaleable, continuous process that can tolerate the mixed feed streams commonly found in real polymer waste. ‘We have been working with mixtures and the process still works as long as the contaminants don’t deactivate the catalyst,’ says Scott.

The process produces both benzene and naphthalene aromatic products

‘It’s really exciting,’ says Charlotte Williams of the University of Oxford; ‘They’ve identified a completely different product range [from cracking polyolefins] which definitely has a market and definitely have high value, and they’re able to make them with quite high selectivity in a reasonable temperature range. It’s a long way from being a deployable system but they present really good data that gives people a frame of reference to understand what’s going on and improve upon it.’

‘In terms of the chemistry, being able to find that little window in the thermodymanics is not easy,’ says Yutan Getzler of Kenyon College in Ohio, ‘I hope that they will do a follow up study in which the cost of getting realistic post-consumer material to a state in which their chemistry works would be seriously considered.’