Plutonium in a spin 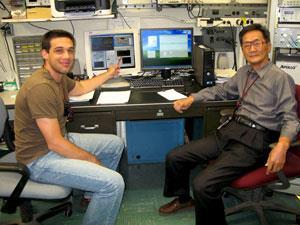 After a half century of trying, spectroscopists have finally pinned down the nuclear magnetic resonance (NMR) spectrum of plutonium-239. The finding will have implications for future studies of the solid-state physics of this important nuclear fuel and might point the way to improved approaches to the long-term storage of nuclear waste.

The atomic nucleus of plutonium-239 has a spin of ½ and a high nuclear moment, so should be active in NMR spectroscopy. However, other characteristics of the atom, such as its enormous internal magnetic field, which arises because of the extremely strong interaction between the nucleus and the atom’s unpaired f electrons, have made it difficult to obtain a clear spectrum. The internal magnetic field is approximately 100 Tesla, so the NMR spectrum is shifted by several orders of magnitude away from the normal range available to spectroscopists. Moreover, spin relaxations of the nuclei flipped by the NMR field are very short at less than one microsecond. Both phenomena have conspired for decades to preclude access to an NMR spectrum for Pu-239.

Nevertheless, the prize is worthy of pursuit given the importance of this radioactive element. Now, Hiroshi Yasuoka and colleagues at Los Alamos National Laboratory in New Mexico, US, and the Atomic Energy Agency, in Ibaraki, Japan, have examined high-purity plutonium(IV) oxide made through nitric acid anion exchange, oxalate precipitation and calcination. The isotopic abundance of plutonium-239 was approximately 94% in their sample.

The team then painstakingly homed in on the NMR signal of the actinide. They used a standard pulsed NMR technique to hunt for the signal at a chilly 4K. A trial run involved sweeping the sample in the spectrometers magnetic field from 3 to 8 Tesla with a tiny step size of just 0.06 Tesla, while it was held at a constant radio frequency of 16.51MHz. From the data thus obtained the team was able to deduce, based on integrated spin-echo intensity, that a clear signal was present at about 5.8 Tesla. The work benefited from the fact that plutonium(IV) in PuO2 has a non-magnetic ground state, so paramagnetic effects are neatly side-stepped.

It was then possible to home in on this peak and optimise the NMR parameters to obtain detailed field-sweep measurements, carefully tracing the observed signal for different carrier frequencies. This allowed them to obtain a value for gamma-n. This is the gyromagnetic ratio, the ratio of its magnetic dipole moment to its angular momentum, which is needed to calculate the energy difference between the +½ and the -½ spin states and the resonance frequency of a given nucleus in a specific chemical environment, thus allowing the structure to be extracted from the spectrum.

The researchers point out that plutonium and its compounds have a complicated chemistry. The element displays numerous oxidation states, four can equilibrate in solution and it can form numerous non-stoichiometric solid compounds. Indeed, Yasuoka and colleagues also investigated a substoichiometric form of plutonium oxide and were able to obtain two distinct NMR signals thus distinguishing between the different oxygen environments.

‘We have been aware of this work since it was mentioned at a conference in February,’ Cambridge University’s Ian Farnan tells Chemistry World. ‘It is an important breakthrough in actinide science. We have thought of searching for its resonance ourselves but have been put off by the wide frequency range and the low likelihood of success. The Los Alamos group has to be congratulated and thanked because it is a great effort that opens up the field.’