Scientists based in Germany have synthesised two polycyclic hydrocarbons with 64 π-electrons and an unusual undulating shape. The compounds’ aromaticity can be tuned by altering the direction of the cyclopenta[b]fluorene components in the molecules.

Curved π-conjugated molecules are typically bowl or saddle shaped – wavy versions have been elusive, until now. The team started with a bischrysene and extended it by annulating two cyclopenta[b]fluorene units to achieve the wavy-shaped structures. 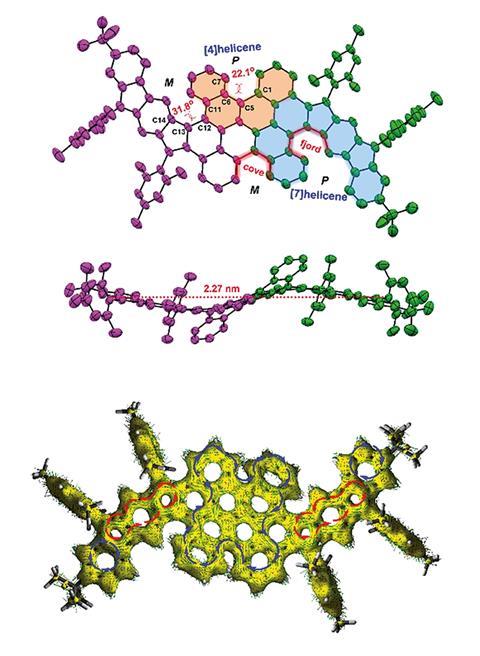 The first compound they produced has two para-quinodimethane units embedded in the carbon skeleton. Experimental and theoretical results show that the compound has a closed-shell electronic structure with weak antiaromaticity.

The second molecule they synthesised, a structural isomer of the first, has two meta-quinodimethane units. In contrast with the first compound, this isomer exhibits tetraradical resonance in its ground state. Compared with most conjugated polycyclic hydrocarbon radicals it has very high stability with a half-life of 91 days in ambient air and light, which seems to be a result of its unusual geometry. And on evaluating the molecule with meta-quinodimethane units in an organic field effect transistor, it exhibited ambipolar charge-carrier transport properties.