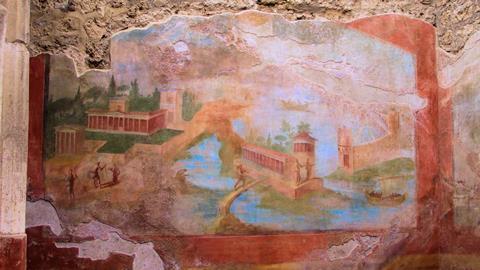 Chemists have conducted the first analysis of fluoride salts in pyroclastic materials, revealing their role in damaging ancient Roman murals

For centuries, the layers of rock and ash that buried Pompeii when Mount Vesuvius erupted have preserved the remnants of the ruined city. But analytical chemists have now found that these same volcanic materials might also be responsible for the deterioration of the city’s artworks, such as its intricate frescos.

In AD 79, an enormous volcanic eruption shook what is now southern Italy, releasing 100,000 times the thermal energy of an atomic bomb. It obliterated the cities of Pompeii and Herculaneum, killing several thousand of the cities’ 20,000 inhabitants. Buildings and people were buried under up to six metres of volcanic rock and ash. But in the aftermath of the destruction, these layers of pyroclastic material have helped to preserve the buildings and their mosaics and frescos, by protecting them from acid rain, for example. 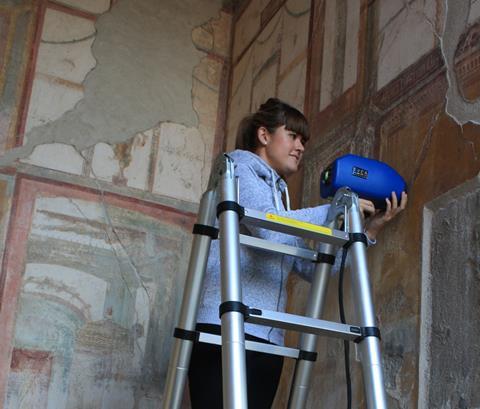 When excavations started in the 17th century, the protective pyroclast was removed, exposing structures and artworks to the effects of light and water that have since caused irreversible damage. Now, chemical analysis has revealed that exposure to moisture may also be speeding up a degrading effect of the remaining pyroclastic material.

The pyroclasts are mostly made of harmless silicates, but they also contain water-soluble salts. Over time, these salts can leach out of the pyroclast and crystallise on whatever surface lies beneath, such as a wall painting. Now, Maite Maguregui from the University of the Basque Country, Spain, together with  Silvia Pérez-Diez, has led the first study identifying the importance of fluoride in these salt crystallisations on mural paintings. ‘It literally makes the pigments fall off,’ explains Pérez-Diez.

‘Up to now, most studies related with the characterisation of salts in wall paintings were directed at sulfates,’ explains Maguregui. But the team wanted to investigate fluoride, because volcanic materials are rich in this ion. ‘In volcanic areas it’s pretty common to have fluorosis, which is an endemic illness related to the fact that fluoride can leach into groundwater,’ explains Pérez-Diez.

The investigation posed some technical challenges. Portable instruments such as x-ray fluorescence spectrometers that are typically used in such field work can’t detect light elements such as fluorine, so the team had to use a portable laser induced breakdown spectroscopy instrument. Additional groundwater analysis and lab-based leaching experiments were also needed, using volcanic material collected at Pompeii, to confirm their findings that pyroclasts are indeed a major – though not the only – source of fluoride ions.

‘What they are saying is what we have for years always said is a protection can also be a cause of damage,’ summarises JoAnn Cassar, a heritage scientist and expert in fresco conservation at the University of Malta. ’[This work shows] how complex a deterioration process is, and how complex the sources are, which often interact and come from different places at different times … I think this is a very good first step to bringing portable equipment more into the field, because the field has a big problem of getting permission to [remove] samples.’

Cassar agrees that the researchers’ proposal to remove the remaining pyroclast would be the right conservation decision. But where salts have been deposited, there is little choice but to leave them in place. In practice, desalination processes can cause further problems because they can increase concentrations of difficult-to-remove ions. Salts are inevitable, Cassar explains, they can’t all be removed and there are always sources for more in a natural environment.

Cassar also notes the importance of this work for monitoring purposes. This remains the most important way to predict damage or detect it early – and for this conservators have to know what ions they are dealing with. ‘I think this method has promise to help with this step, which is essential before you even touch the object,’ Cassar says.

This article was updated on 3 November 2020. A previous version suggested that the researchers had proposed desalination as a remediation approach, which is not the case.