Wasting heat energy harms both the environment and the economic efficiency of a process. Qpinch (formerly known as Caloritum) in Antwerp, Belgium, has developed an innovative chemical process to recycle waste heat to a more useful level than conventional heat pumps.

‘This is not just a problem for the chemical industry, it’s a problem for the entire industry,’ says Christian Heeren, one of the company’s two founders. Companies buy gas and burn it to produce steam to run all kinds of processes from the food industry to papermaking and chemical production. Such processes can be running for around 8000 hours a year, which translates into a huge energy demand and a lot of CO2 emissions. ‘At some point, the steam is deteriorated to the point where it is no longer useful.’ To comply with legal requirements, companies often have to spend additional energy and effort to further cool down the waste heat, before they are allowed to release it into the environment.

That was what got Wouter Ducheyne, Qpinch’s other founder and chief executive, thinking about the problem. ‘When you cycle around the port of Antwerp, you see a lot of waste heat coming out of the cooling towers,’ he says. ‘I was thinking – why couldn’t we use that heat somewhere else, at home for example.’ But he quickly realised that transporting stored energy would wipe out much of the saving. ‘It’s more efficient to use it locally, so we switched from thinking about heat storage to a heat pump.’

Qpinch’s technology uses liquid polyphosphates in a two-stage process to capture heat from hot water or low-grade steam between 75°C and 150°C. In the first reactor, the waste heat drives a condensation reaction to make phosphate oligomers, releasing water. ‘Then when we add the water back in again [in the second reactor], we have a hydrolysis reaction, and this releases heat,’ Ducheyne explains. Because the hydrolysis releases heat quickly, it can be used to generate steam efficiently at a higher temperature than the waste heat input – about 130–200°C. 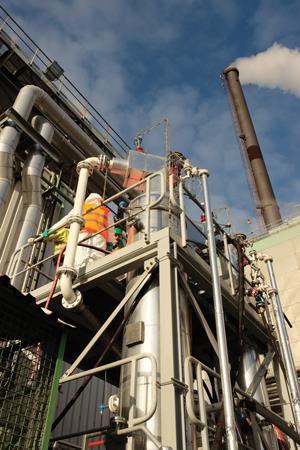 The idea is borrowed from nature’s energy principle, says Ducheyne. All living cells use adenosine triphosphate (ATP) and adenosine diphosphate (ADP), adding phosphate to ADP to store energy as ATP, then hydrolysing the ATP back to ADP to release it. ‘We developed the technology with Christian Stevens at Ghent University, stripping away the organic part of the molecules and just use the inorganic part to capture the heat,’ he adds.

In energy terms, around half of the heat input is returned as useful steam. ‘But at this moment all the heat is wasted, so anything you recover is gain,’ Ducheyne points out. The rest mostly goes into driving the process itself. That means that the reactor requires minimal electricity input, which reduces running costs. This is another advantage compared to conventional heat pumps, which use a lot of electricity.

But Qpinch’s biggest advantage is that it can deliver a higher ‘heat lift’ – the temperature difference between the input and output streams – than conventional heat pumps. The system can produce heat lifts of 60°C or more. ‘That’s really important when it comes to turning waste heat into useful heat,’ says Ducheyne.

That high heat lift helps Qpinch bridge the gap between different energy management technologies, explain’s Wouter De Muynck from energy services company Engie, who is working with Qpinch. ‘It’s easy to transform heat to lower temperatures, just using the laws of thermodynamics, but it’s more difficult to increase the temperature,’ he says. ‘With Qpinch we can cover the gap between where traditional heat-pumps top out, and where steam applications begin.’

Recovering what was once waste heat in this way saves companies money · they need to buy and burn less fuel. That makes their processes more efficient and more profitable. ‘At the same time, and even more important, there is a drive to become more energy efficient and reduce CO2 emissions in producing their products,’ says Heeren.

However, the kind of industries the company is targeting require solid evidence that the technology is compatible with their processes and reliable enough to operate continuously. To demonstrate that, Qpinch has built a customisable reactor set-up at a nearby industrial waste processing plant run by Indaver. Rob Kruitwagen, Indaver’s director for Belgium, explains why the company was keen to support Qpinch. ‘Indaver stands for sustainable waste management – we want to recover all valuable materials and energy from waste,’ he says. ‘By partnering, we also take part in the development and bring sustainable waste management a step further.’ 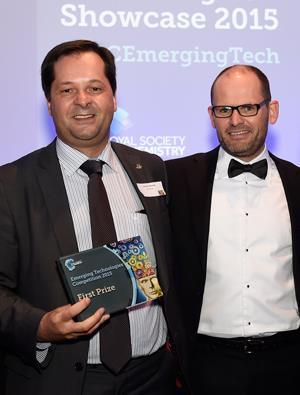 Qpinch teamed up with Christian Stevens to develop the technology, which won the RSC’s Emerging Technologies competition

The reactor takes real waste heat from one of Indaver’s thermal treatment plants and resupplies it as steam, but it can be tailored to different input and output conditions to fit a potential customer’s requirements. ‘From the moment you can show industry that you have reliable equipment, you can start to sell it into the market,’ says Heeren. Winning the RSC’s Emerging Technologies competition in 2015 has also helped convince customers of the quality of the science behind the technology. The first commercial installation is in the process of being built at an ethanol plant in Poland, he adds. ‘The capacity will be four times the size of the Indaver pilot project.’

Collaboration has been critical in developing the technology to meet the needs of different industries. Qpinch has support from the port authorities in Antwerp, who are encouraging companies in the port complex to improve sustainability. ‘Within the port is the biggest petrochemical cluster in Europe,’ says Marc van Peel, vice mayor of Antwerp and chairman of the port authority. ‘In the petrochemical sector, we’re seeing an enormous increase in production volumes, but also a decrease in emissions. This initiative is a good step forward in integrating sustainability in the petrochemical cluster.’