Many organic transformations involve carbocations as reactive intermediates. These are usually formed via a heterolytic C–X bond dissociation to give a carbocation C+ and an anion X-. Current understanding is that the bond dissociation energy decreases with increased methyl substitution because of the stabilising effect of the methyl groups, as well as relief due to steric repulsion: going from substrate to carbocation gives the substituents proportionally more room in a more substituted system. However, a team in the Netherlands, led by Matthias Bickelhaupt at VU Amsterdam, has investigated this from a different angle. 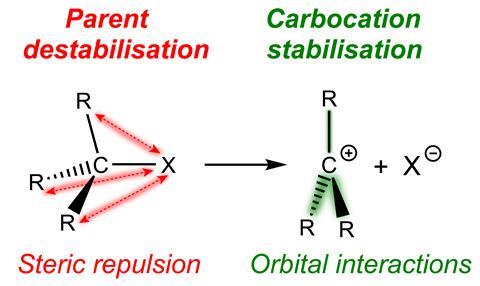 The team studied dissociation of the C–X bond (R = H or Me; X = F, Cl, Br, I, H, CH3) to unpick why the bond strength of C–X bonds decreases as the degree of alkyl substitution increases

Nearly 20 years ago, Bickelhaupt wondered why chlorine should stabilise a carbanion better than fluorine. ‘Fluorine, as a much more electronegative group, should stabilise the anion better, should pull away the negative charge,’ he argues. The received wisdom, Bickelhaupt says, was based on ‘hand waving, [with] no quantitative data behind it’. ‘It all goes back to the isodesmic equation, which, for several reasons, by computational chemists, but especially by experimentalists, was used because the bond dissociation process is often difficult to directly measure, and people always measure equilibria.’ An isodesmic reaction is a hypothetical reaction used to measure the thermodynamic stability of organic molecules; the types of bonds made in forming the products are the same as those broken in the reactants.

Instead of looking at the reactive species, the anion, Bickelhaupt focused his quantum chemical calculations on the conjugate acid and found that chlorine does not stabilise the carbanion more than fluorine, but the other way round, as he expected: FCH2- is more basic than ClCH2- because fluorine has a greater stabilising effect than chlorine on the conjugate acid.2

This led to them asking if something similar held for radicals.3 And then cations, where the team has now shown that destabilising steric repulsion between alkyl substituents and the C–X bond drives a decrease in the bond strength of C–X bonds as the degree of alkyl substitution increases. Indeed Trevor Hamlin, who also worked on the study, advises that researchers should not overlook the ‘more boring’ species because these can make a decisive contribution to bond dissociation energy trends.

‘Considering that carbocations have been studied for well over a century, one might think that there is nothing more to discover,’ comments Dan Thomas Major of Bar-Ilan University, Israel. ‘It would be interesting to see whether such an effect also exists in biological systems. A better understanding of the effects of substituents could have an impact on the planning of synthetic routes involving carbocation mechanisms, and on how we can exploit enzymes for biosynthesis using non-natural substrates.’