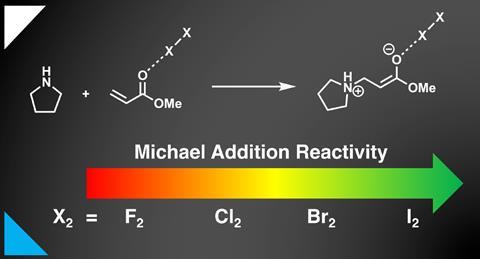 The Michael addition goes via a different mechanism to that previously thought, a modelling study has revealed

Iodine catalyses the Michael reaction – but not in the way chemists thought, a computational study has revealed. Rather than stabilising the reactants’ interactions through halogen bonding, reducing quantum mechanical Pauli repulsion is the secret of iodine’s success. ‘Our finding is a paradigm shift of looking at this reaction,’ says the study’s leader Matthias Bickelhaupt from the Free University Amsterdam in the Netherlands.

Discovered in 1887, the Michael addition is one of the most recognisable and useful reactions in organic synthesis. It creates a bond between an activated alkene, the Michael acceptor, and a carbon or heteroatom nucleophile, the Michael donor. The fact that iodine and other halogens act as catalysts for the reaction has been known for more than 100 years.

Pauli repulsion occurs between occupied orbitals, in this case between the pyrrolidine nitrogen’s lone electron pair and the acrylate’s π-electron system. With its low energy antibonding orbital, iodine pulls electron density away from the π system, decreasing Pauli repulsion to the donor orbital.

Bickelhaupt and his collaborator Israel Fernández from Spain’s Complutense University of Madrid dissected the physical effects responsible for a smaller activation energy in the presence of iodine. To their surprise, the orbital interaction between donor and acceptor remained nearly constant.

‘I think it’s very interesting and it deserves some further investigation,’ says physical chemist Albeiro Restrepo Cossio from the University of Antioquia, Colombia. ‘I’m a theoretician, so I’m really pleased to see that there is a purely quantum effect, the Pauli repulsion, which has no classical analogue, that controls the reaction mechanism.’

But Cossio remains sceptical about how general the concept is. ‘I think they have too few cases; they only have one particular type of Michael reaction,’ he says. ‘I’m happy with the overall conclusions, but I have some reservations about the details.’

Bickelhaupt’s students are already investigating if halogens’ ability to reduce Pauli repulsion applies to other reactions. ‘I’m confident that this is a very widely acceptable new model for halogen-catalysed reactions,’ he says.

For organic chemists like Byrd, understanding the ins and outs of the Michael mechanism might help them design better catalysts. ‘Michael additions can be tricky depending on the substrates,’ she explains. ‘When you’re trying to do reactions in the lab, you are going to do whatever works. The real utility of this [study] will come in when things aren’t working.’