Steric congestion, rather than orbital interactions, is the driving force behind why C–C and C–H bonds contract as the number of substituents surrounding the carbon centre decreases, new research shows.1

It is a well-known phenomenon that C–C and C–H bonds decrease in length as the carbon centre changes from being sp3 to sp2 to sp hybridised. Historically this difference has been explained by the increasing amount of s-character present in the hybrid orbital making up the bond. As s-orbitals are more contracted than p-orbitals, a shorter bond length is required for optimal orbital overlap.

Now, a team of researchers from the Netherlands has used Kohn–Sham molecular orbital theory to suggest that the decreasing bond length is actually the result of reduced steric repulsion when there are fewer substituents around the carbon centre. 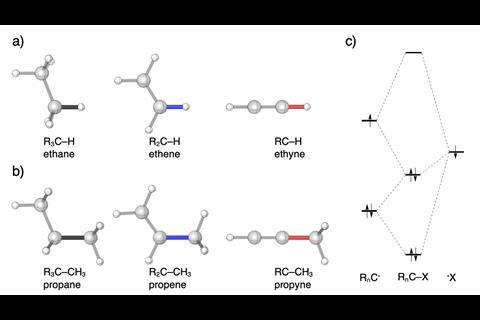 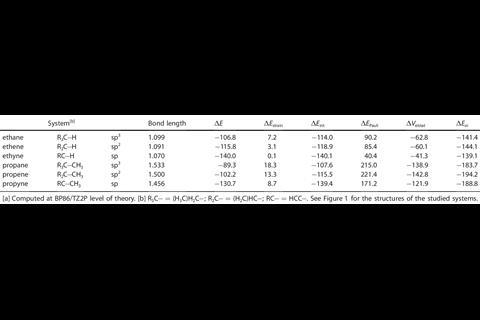 The C-H bond length decreases along ethane, ethene and ethyne, while the corresponding C-C single bond lengths decrease along propane, propene and propyne 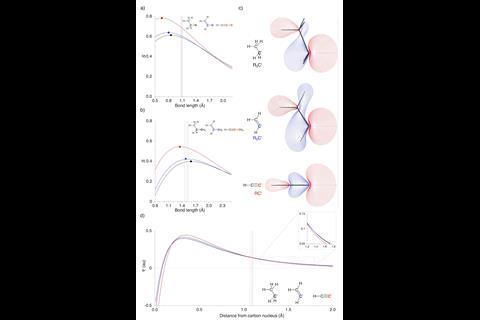 Note, two striking phenomena: (i) all equilibrium C-H and C-C bond distances differ significantly from the distance at which the bond overlaps achieve their maximum, C-H bonds are in fact all longer; and (ii) the contraction of C-H and also C-C bonds as the carbon atoms involved vary, in s–p hybridisation, along sp3 to sp2 to sp, is significantly smaller than the variation in the distance at which the corresponding bond overlaps achieve their maximum

‘Interestingly, we do indeed find that, for example, the C–H bond overlap achieves its optimum at ever shorter bond distances along the series ethane, ethene, ethyne,’ says Matthias Bickelhaupt of VU University Amsterdam, who led the work. ‘However, that happens at very short distances, around 0.7 to 0.8Å, far below the actual equilibrium distance of around 1.1Å. Our quantitative bonding analyses reveal that the steric [Pauli] repulsion with closed-shell orbitals on the carbon fragment is a dominant factor, which pushes the equilibrium C–H distance to the usual, and significantly longer, values.’

The idea that Pauli repulsion could be responsible for the changes in C–C and C–H bond lengths is not a new one. Lawrence Bartell proposed a similar concept in the 1960s that he dubbed the consequence of non-bonded interactions,2 but the theory has never been quantitatively proven before.

‘I think that the most important advancement has been the development of a physically sound, quantitative molecular orbital model that not only reproduces the observable trends but also covers all relevant underlying causal mechanisms and quantifies their importance,’ says Bickelhaupt. ‘I can only speculate why Bartell’s proposal has over time gone unnoticed in our textbooks, even though steric factors are invoked on many other occasions. But a reason might be that Bartell’s proposal was based on assuming a soft sphere model, using model potentials, the origin of which was not unequivocally clarified, even though they are very plausible. The hybridisation model, on the other hand, did provide an attractive, causal mechanism that is directly and even straightforwardly rooted in the orbital electronic structure.’

While the study does confirm the notion that hybridisation encourages shorter bond lengths, the idea that it is not the dominant factor would be a shake-up to how bond length is currently taught.

‘What we try to do as instructors is to give students useful mental models they can apply to wide-ranging problems in structure and bonding, and the hybridisation model is useful,’ says James Ashenhurst, founder of MasterOrganicChemistry.com, an online educational resource for chemists. ‘This paper provides an example of other models to apply to bonding that may ultimately prove more accurate that advanced students would be well-advised to look into.’

Ashenhurst is not confident that these findings will have much of an impact on general discourse within the community, however. ‘Given the intuitive nature of the hybridisation model and its prevalence in introductory organic chemistry education, I think this paper will change the course of introductory organic chemistry pedagogy no more than a pebble thrown against the hull of a moving supertanker.’

Thanks to István Hargittai, professor emeritus at Budapest University of Technology and Economics in Hungary, for his guidance on the work of Lawrence Bartell.