Electronegativity’s role in determining bond strengths needs to be rethought

‘One of the striking exceptions to the electronegativity model is the series of carbon–halogen bonds which – ironically – is a popular example for illustrating this oversimplified approach,’ notes study leader Matthias Bickelhaupt from Vrije Universiteit Amsterdam and Radboud University in the Netherlands. 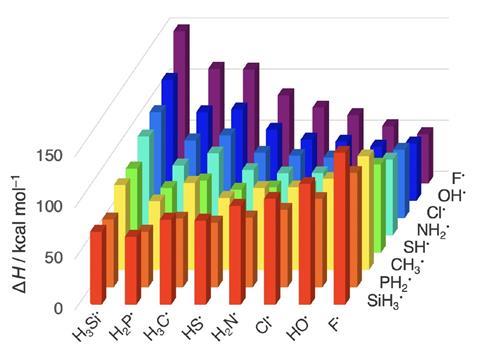 The study shows that, in some cases, the relationship between bond dissociation enthalpies (ΔH) and electronegativity is simply a side product of a different underlying mechanism relating to atom size differences

Molecules’ structure and reactivity strongly depend on the stability and length of chemical bonds, so understanding how these parameters vary for different element–element combinations across the periodic table is crucial. ‘This can help scientists design better methods for producing new molecules, such as pharmaceutical compounds and functional materials,’ says chemical bond expert Catharine Esterhuysen at Stellenbosch University, South Africa, who was not involved in the study.

Using density functional theory, the Dutch team analysed ‘element–element bonds involving atoms from periods 2 and 3 and groups 14 to 17, which represent a systematic series of archetypal bonding situations across the periodic table, explains Bickelhaupt’s colleague Trevor A Hamlin. ‘These bonds are ubiquitous in the chemical sciences and feature in natural products, chemicals and materials.’

‘The [researchers] show that along a period, the variation in electronegativity is indeed the origin of the trend in bond strength; it’s within a group that the traditional model breaks down,’ comments Esterhuysen.

She explains that Bickelhaupt’s team carefully analysed how the bond energy between two atoms changes as they are brought closer together. Such energy changes have several components as a result of the different ways in which electrons and nuclei interact with each other. ‘The researchers decomposed the bond energy into components, using the activation strain model and energy decomposition analysis, and then examined their relative influence,’ Esterhuysen explains. This allowed them to identify the driving forces behind the formation of different bonds, and find out how these change over periods and groups.

‘Along a period, for instance from carbon–carbon to carbon–fluorine, bonds strengthen because the electronegativity difference across them increases as the bonding electron pair is stabilised more and more on the more electronegative atom,’ observes Bickelhaupt. But ‘down a group, for instance from carbon–fluorine to carbon–iodine, the increasing effective atom size is the causal factor behind bond weakening, via increasing steric Pauli repulsion.’

The fact that the study assessed multiple element–element distances, and not just the equilibrium geometry, is important because that’s the only way to find out what drives bond formation, Bickelhaupt adds. ‘Our intuitive “effective-atomic-size bonding mechanism” can be applied to understand the bond length and strength for multiple series of bonds across the periodic table,’ he says.

‘This is an intriguing reminder that in science we should always be careful of giving a simple answer,’ says Esterhuysen. ‘As the [researchers] point out, if one really wants to obtain a full understanding of a bonding mechanism, it must be studied at a deep and fundamental level.’