Portrait gets a digital makeover to restore faded red pigments

Scientists in the US have used Raman spectroscopy to show the original colours of a Renoir painting. By identifying a red dye that had been degraded by light they were able to digitally restore the faded background of ‘Madame Leon Clapisson’ to its former glory.

‘The recolourised version of what we imagine the painting was like is based on molecular analysis,’ says Richard Van Duyne from Northwestern University, who presented the image at the 2014 meeting of the American Association for the Advancement of Science (AAAS). ‘There are already many ways to analyse the inorganic content of paintings and the elemental composition, and now we add molecular resolution to the whole enterprise.’ 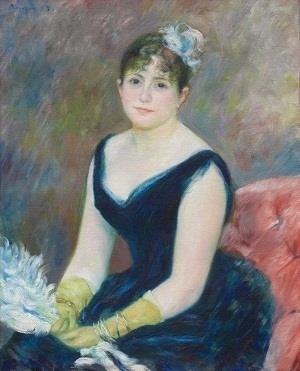 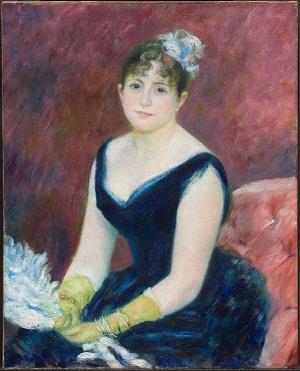 The portrait dates back to 1883, and today its subject sits against a dark, greyish background. But when Van Duyne’s collaborators at the Art Institute of Chicago began conservation work on the painting, they realised the colours were once much more vibrant.

‘Around the edges of the painting the frame has protected the colour from fading,’ says Van Duyne. This produced a narrow red stripe from which the team could take small samples of the original paint.

To determine the molecular composition of the pigments they used Surface Enhanced Raman Spectroscopy (SERS), a technique widely used in biomedical research that Van Duyne has spent the past few years adapting for the study of organic paints. Routine art analysis techniques like x-ray fluorescence scanning are unsuitable for this kind of paint, he explains, as they rely on elemental signatures from metals. SERS involves adsorbing tiny paint samples to metal nanoparticles, which enhances the Raman signal so trace amounts of the pigment molecules can be detected. 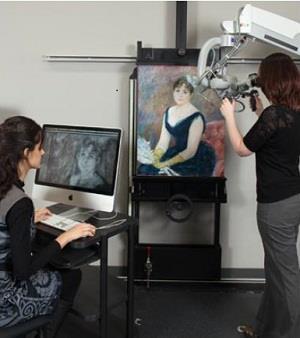 The team were able to identify the red pigments as carmine lakes, which are made of organic dyes derived from the cochineal insect Dactylopius coccus. These dyes are based on the highly light-sensitive molecule anthroquinone, so over the years the strong red colour disappeared from exposed parts of the painting.

Imaging software was used to ‘colour in’ areas where the red dye had been and create a digitally remastered version of the painting. Van Duyne explains this image is not a replacement for the real thing, and there are no plans to alter the original, but seeing the two side by side will allow gallery visitors to see how the mood of the painting has changed over time.

Joris Dik from Delft University of Technology in the Netherlands does similar work on paintings by Van Gogh and Rembrandt. He says this kind of analysis can be very useful to art historians who want to understand more about the materials and techniques used in the past. ‘Many of these artworks are really chemically dynamic, they’re not as static as people have thought,’ he says. ‘We want to get eye to eye with the originals because the alteration can be really dramatic.’ He adds that investigating the chemical changes that pigments undergo can inform galleries of the most suitable storage conditions, as well as helping manufacturers to create more durable, fade-resistant paints and materials for today’s artists to work with.