Researchers have created a liquid surfactant that can be moved by a magnet. The discovery opens the way to soaps and detergents which could be directed to a specific point or removed from a mixture by applying an external magnetic field.

Surfactants, which are ubiquitous in society in the form of everything from detergents and emulsifiers to wetting agents, consist of molecules containing a water-soluble anionic ’head’ joined to a water-insoluble cationic ’tail’. The molecules then spontaneously aggregate into particles known as vesicles or micelles.

The research team, led by Julian Eastoe at the University of Bristol in the UK, took conventional surfactants and mixed them with an iron salt, resulting in the exchange of the original anion with the iron-containing ion. The resulting ionic liquid surfactant was shown to be able to respond to a magnetic field. Vertically suspended droplets could be deviated by a small magnet and, more spectacularly, surfactant covered by a less dense organic solvent could be pulled through the upper layer of the solvent by a magnet, overcoming both gravity and the surface tension effects at the interface of the two liquids (see video). 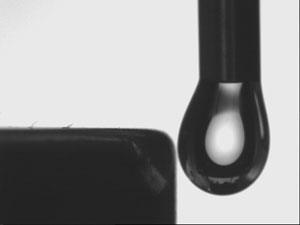 Magnetic surfactants could give users exquisite control over them

To understand the cause of the magnetic effects, the team probed the surfactant using small angle neutron scattering, carried out at the Institut Laue-Langevin neutron source in Grenoble, France.

’This told us that there was internal organisation in the liquid, that there were clusters present,’ says Eastoe. These clusters consist of micelles around 10nm across, in which the iron is aggregated in the central core. ’Isolated ions are not of themselves magnetic,’ he explains. ’There needs to be a connection between the units. The proximity of the iron in the aggregates provides this communication between the iron-containing parts of the molecule.’

Eastoe says the team is now looking to develop more responsive and sensitive magnetic surfactants. ’What we have done is a proof of principle,’ he says. ’We want to know if we can modify and improve chemicals so that they can perform different tricks and different tasks. We have shown that magnetic soaps and surfactants are a reality. It opens the way to being able to tell such solutions where to go, to target them or direct them to specific areas.’

Peter Griffiths, who researches surfactant chemistry at Cardiff University in the UK, is impressed by the study. ’Surfactants are some of the most versatile molecules known to us - indeed they are encountered in huge quantities by us all everyday - because of their ability to alter the properties of surfaces and interfaces,’ he says. ’Eastoe has shown another remarkable feature of these fascinating molecules, where magnetic fields may be used to tune the behaviour of the surfactant at the air-water interface, indeed overcoming the effects of gravity it would seem. This study opens the door for a range of new application for surfactants that could lead to more efficient and greener chemical process.’