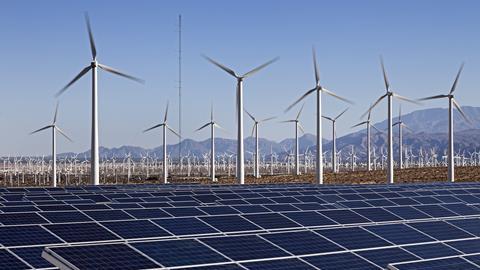 Solar and wind power are a more effective way to cut carbon dioxide emissions than carbon capture and storage (CCS), a new study has found.

The international team considered the poor uptake of CCS technologies in fossil fuel power plants against their energy return on energy invested (EROEI). Comparing this with renewables the researchers found that while CCS technologies could reduce greenhouse gas emissions, they are insufficient to fulfil their planned role in reaching climate change targets by 2050.

In 2012, the International Energy Agency (IEA) presented an emissions reduction scenario that would keep the global average temperature rise to below 2°C. In that projection, CCS accounted for roughly 14% of the total needed emissions reductions by 2050. However, despite the importance of CCS in reaching this target, its uptake has been slow. Under the IEA plan, for example, China would develop 349GW of fossil fuel power stations with CCS in the next 31 years, but the country does not currently have any large-scale CCS projects and has none planned in the next five years.

One area that has seen a significantly greater uptake than CCS is renewable energy, such as solar and wind. With that proven scalability, the team investigated whether or not those technologies would be a more effective path toward meeting current climate change goals. The team found that while CCS has an EROEI of between 6.6 and 21.3, renewables have a potential EROEI of between 9 and 30+. As renewables are less reliant on finite resources – unlike fossil fuel burning CCS power stations – the team found that renewable energy was likely to be a more effective path to meeting climate change goals. The team also concluded that although CCS technology is not a critical contributor to fighting climate change, it can work as an effective supplementary contributor to emissions mitigation.