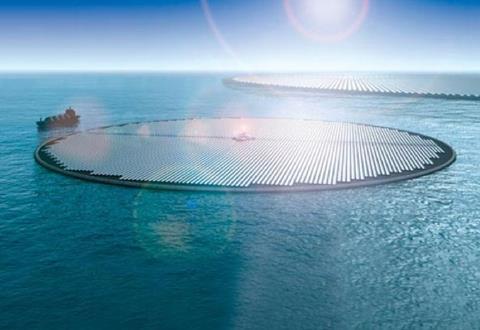 Artist’s conception of solar islands in the open ocean.

Millions of marine floating islands, each as large as a football field and powered by sunlight, could harvest carbon dioxide and produce enough fuel to power the world’s planes, ships, trains and lorries. These solar methanol farms, proposed by scientists from Switzerland and Norway, could even eliminate all global fossil fuel emissions.

Solar panels covering the 100m-diameter islands would provide energy for combining carbon dioxide and hydrogen into methanol – a compound that can either be used directly as a fuel or serve as a feedstock for petrochemical products. A chemical plant housed in a moored ship would provide the ingredients for this reaction: hydrogen from water splitting and carbon dioxide harvested from seawater. The area underneath the islands could even be used for fish farming.

A cluster of 70 islands could produce 1.75 tonnes of methanol per hour, the team calculates. To compensate for emissions from the long-haul transport, 170,000 such clusters would be needed. They could be placed along shorelines near the equator, in particular Indonesia, northern Australia and Brazil – areas that have lots of sunlight, small waves and few hurricanes. If 1.5% of the world’s oceans was used for solar methanol farms, they could offset global fossil fuel emissions altogether.

This vision, however, is not without its challenges. Electrolysing seawater creates unwanted chlorine, so the researchers suggest desalinating the water before use. Carbon dioxide can be harvested from seawater – its concentration here is 125 times higher than in air – but it requires heating or acidification. Electrodialysis, which effectively acidifies one part of a solution, could be a practical extraction method. Moreover, to be economically viable, each island cluster can’t cost more than $90 million (£70 million).

The most challenging part, however, might be the catalytic methanol production. Current copper–zinc–aluminium catalysts require high pressures and temperatures. But if temperatures get too high, hydrogen and carbon dioxide can react to form unwanted carbon monoxide. Microstructured reactors and more selective nickel–gallium catalysts might alleviate these problems, but they still need to be tried and tested.

A lot of questions remain, such as whether these technologies could be combined in the way the scientists suggest, and what the best practical design for these facilities might be.