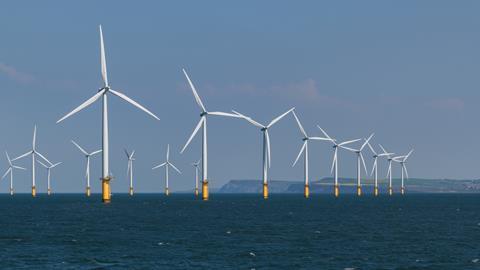 Zero-emissions economy is both feasible and affordable for the UK

The UK should vigorously pursue the ambitious target of net-zero greenhouse gas emissions by 2050. That is the conclusion of a report from the Committee on Climate Change. It concluded that this target was necessary, feasible and cost-effective.

The committee reviewed the latest evidence on climate change and appraised costs and benefits to the UK economy of net-zero emissions and concluded that the technologies to deliver net-zero were ready now. However, to meet this target government and industry will need to work harder. ‘Just because the target is 2050, we still need to have a high degree of urgency and do some of the things the report talks about right away,’ says Peter Taylor, chair of sustainable energy systems at the University of Leeds, UK, and a member of the UK Net-Zero Advisory Group for the committee.

The report draws on 10 new research projects, three expert advisory groups and the work of the Intergovernmental Panel on Climate Change and others. ‘The committee is an independent body but carries a lot of credibility in the UK,’ says Taylor. ‘It holds an official advisory position…. Its conclusions carry weight.’

In 2008, following the committee’s advice, the UK opted to reduce carbon dioxide emissions by 80% by 2050 compared to 1990 levels, accepting a cost of 1 to 2% of GDP. This positioned the UK as a leader in the climate arena, with the 2008 Climate Change Act setting the world’s first legally-binding long-term emissions target.

The new advice now follows an appraisal of technologies for emission cuts. ‘There is no central role for basic research. The key challenge is policy,’ says Niall Mac Dowell, environmental policy expert at Imperial College London, UK. ‘Policy should enable rapid deployment of existing technology, while R&D simultaneously improves and refines technology not on the market.’ He adds that he was pleasantly surprised by the rapidity of the UK government’s response, which announced its attention to legislate for net zero. This would set the toughest standard of any economy.

The report stressed the important role carbon capture and storage (CCS) would have to play in meeting the target, with 75 to 175MtCO2 needing to be trapped each year by 2050. This would mean capturing carbon dioxide in flue gas from steel, petrochemical and cement works, as well as power plants, before sending it for geological storage. 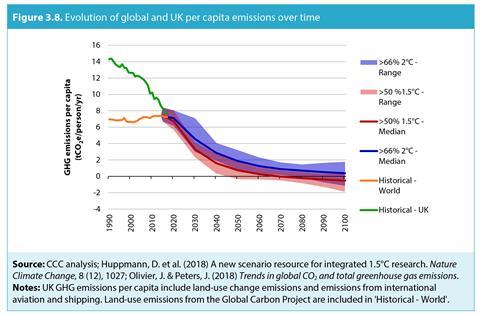 While there are 43 large-scale projects operating or being developed around the world, none are in the UK. The committee recommended that ‘CO2 infrastructure development should start as early as possible’, with at least one cluster operational by 2026. Hydrogen production should also start at scale by 2030 at each of the industrial CCS clusters. CCS demo projects will need to be supported by hard cash from government, in partnership with industry, says Taylor.

To date, groups in the UK have competed for the same pot of money for CCS, which has stifled cooperation, says Hannah Chalmers, a mechanical engineer at the University of Edinburgh, UK. She welcomes the committee’s collaborative ‘team UK’ approach. ‘Given the timescales and major infrastructure needed, this is quite urgent. We need a policy framework and we need common infrastructure,’ she adds.

‘What comes out again and again is the unique importance of getting CCS technology deployed in the UK at scale in a power and industrial context,’ says Mac Dowell. Countries including Canada, the US and Norway have already deployed CCS at pilot or commercial stage.

The report chides policymakers for insufficient ambition and slow progress in some areas. 2040 is too late for phasing out petrol and diesel cars, and there has been an absence of serious plans to decarbonise the heating system. ‘Decisions will be required from the mid-2020s on the balance between electrification and hydrogen in decarbonising heating, and the implications for gas networks,’ the report states. The UK will need to quadruple the supply of low-carbon electricity by 2050, and refocus efforts on energy efficient heating.

The target for afforestation is currently 20,000 hectares per year, whereas on average less than 10,000 hectares is being planted. A new approach to agriculture, replacing the EU Common Agricultural Policy, could promote low-carbon farming and encourage land-use changes, the committee suggests.

There are also some positives points. Since 1990, UK emissions fell 12MtCO2 per year, on average. Reliance on coal-fired power plants is falling fast too, with the UK having just gone a week without using any coal power for the first time since 1882. 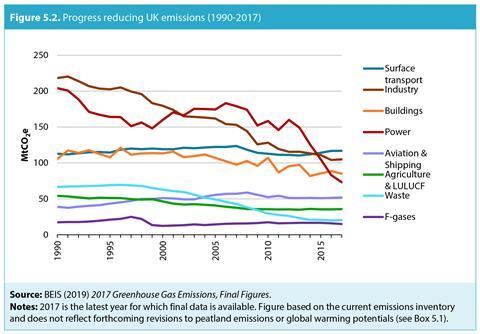 ‘It is important to recognise that, given the right policy environment, we can achieve net-zero emissions in an affordable way,’ says Mac Dowell. ‘It involves spending 1 to 2% of GDP, but the transition will create new jobs and new industries at all levels of the UK economy, including export-focused jobs.’

The UK is now the largest market for offshore wind in the world, having helped to drive costs down. The committee envisions a doubling of electricity demand by 2050 and 100% of this must be covered by low-carbon sources. This could be achieved with 75GW of offshore wind, requiring 7500 turbines.

The report points out that the cost of electric cars and renewable power has fallen far more quickly than predicted in 2008. However, aviation emissions need attention, Taylor notes. ‘We have to move away from jet fuel, maybe having electric planes for short haul flights. That wouldn’t have seemed credible 10 years ago, but battery technology has really advanced.’

The committee also recommends accelerating a shift towards a diet that is primarily plant-based with far less meat and dairy.

Though the report does not dwell on blue skies research, Chalmers says this can be part of the solution. New materials for direct capture of carbon dioxide from the atmosphere could transform the situation, for example. ‘For some things, like CCS, they are saying that we really need to get on with this. It is crunch time,’ she adds.