Humans influence soil chemistry from beyond the grave 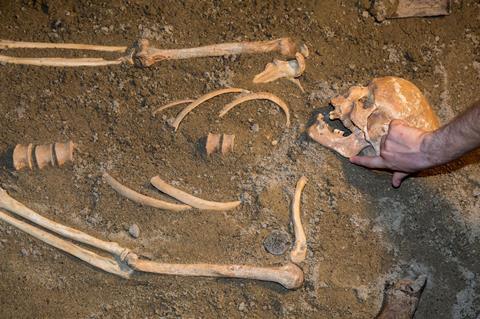 Humans influence their environment even after death, as bodies and ashes from cremation release elements such as iron and phosphorus into the soil. A team of Czech scientists has now found that these geochemical changes at burial sites can persist for millennia.

Ladislav Smejda and colleagues from the Czech University of Life Sciences Prague used x-ray fluorescence spectroscopy as part of the Deepdead project to identify and quantify the levels of different elements that are released by human remains depending on how they are treated. Soil from a medieval burial site contains more phosphorus, iron and zinc than the surrounding soil, while the ground in a modern ash scattering garden shows increased levels of phosphorus and calcium, the major components of human ashes. During excarnation – the practice of leaving a dead body exposed to the elements, which the team simulated using animal carcasses – the soil below the body accumulates zinc, sulfur and phosphorus.

While all of these elements are essential plant nutrients, the custom of burying many bodies in a small area means that the nutrients accumulate here instead of being spread evenly. These nutrient imbalances persist for centuries or even millennia, leading the researchers to call for more environmentally friendly burial practices.