Root and branch reform of roses show off organic electronics

Roses have been transformed into living electronic circuits by introducing semi-conductive polymers into the channels that transport water and nutrients. Cuttings were remodelled to demonstrate wires, basic digital logic and elements of a display. This technology could allow the physiological control of plants, regulating their growth and metabolism, or even harvesting electrical energy from photosynthesis taking place in their leaves. 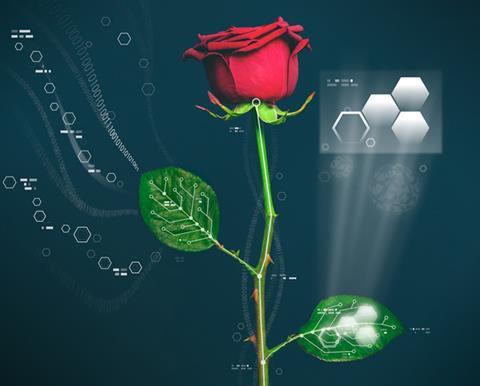 Bioelectronics is the combination of electronic devices with biological tissues in living systems. There are several challenges inherent to this technology. The device needs to be biocompatible, and stable in the biological environment. The interface between hardware and biological systems needs to be designed carefully to prevent damage to fragile organic systems. The final step is to achieve reliable electronic performance of the device. This has now been achieved for the first time in plants.

‘The roots, stems, leaves and vascular circuitry of plants are responsible for conveying the chemical signals that regulate growth and functions. From a certain perspective, these features are analogous to the contacts, interconnections, devices and wires of discrete and integrated electronic circuits,’ explains Roger Gabrielsson, part of the group that carried out the research. These four key components of organic electronic circuits have been demonstrated using the xylem, leaves, veins and plants’ own chemical signals as the template and an integral part of the circuit elements and functions.

‘Due to plants’ amazing abilities to adjust, regulate and respond to changes in the chemical environment, many forms of conductive polymers needed to be synthesised and investigated, with varying charge, size, concentration and pH,’ says Gabrielsson. The group discovered that the semiconducting polymer PEDOT-S could be used to create a network of wires inside the stem without killing the plant. The rose was placed into water containing the dissolved monomer, which was sucked up the stem into the plant’s vascular water transport system, the xylem. The monomers were then polymerised in situ within the plant’s stem. The polymer forms a hydrogel film inside the tubular channels, which acts as conductive wire. These wires were up to 10cm long, and were used to form organic electrochemical transistors with logic gate functionality in the stem of the plant.

Primitive electrochromic displays were also formed by infusing the leaves of the rose with a solution of a PEDOT variant and nanofibres of cellulose via a vacuum infiltration method, while the leaf was still attached to the plant. The mixture was drawn through the pores of the leaf into the compartments of the spongy mesophyll layer. Each cavity acts as an electrochemical cell, and can be treated like an organic pixel. Applying a voltage to the cells causes the colour of the pixels of the leaf to change as the polymer reacts with ions in the leaf.

Gabrielsson has high hopes for the future of the research. ‘These results are early steps to merge the diverse fields of organic electronics, material chemistry and plant science. Controlling and interfacing with chemical pathways in plants could pave the way to applications for energy, environmental sustainability and new ways of interacting with plants.’ This sentiment is echoed by Andrew Adamatzky, director of the unconventional computing centre at the University of the West of England, UK. ‘The results presented by Stavrinidou et al are yet another wonderful development in the field of living technologies – hybrids of wetware and hardware.’

Adamatzky is impressed that the researchers were able to modulate electrical properties of the plant vascular system and realise transistor-like devices and some Boolean logic gates. ‘This shows that plants can be used as programmable (up to some degree) computing circuits. And therefore, in a very distant future, we can grow vegetable computers in our gardens.’

The future of organic electronics is bright. ‘The research and development focused on developing computing architectures from plants will lead to a revolution in the bioelectronics, advanced functional materials and the computer industry,’ Adamatzky adds. ‘Combined with conventional electronic components in a wet-hardware chip, plant roots networks will radically improve the performance of digital and analog circuits.’