Twenty-six years after nanoscientists wrote ‘IBM’ in individual atoms, researchers in the Netherlands have taken a crucial step towards making atomic-scale information storage a commercially viable prospect with a rewritable, kilobyte-sized atomic-scale memory.1

In Richard Feynman’s classic lecture in 1959, There’s plenty of room at the bottom, he anticipated nanotechnology by discussing the ultimate limits of data miniaturisation that could be achieved by controlling the ordering of atoms. This seemingly impossible feat was achieved in 1990, shortly after Feynman’s death, when Don Eigler and Erhard Schweizer of IBM Almaden Research Center in California used a scanning tunnelling microscope (STM) to write their corporate logo in xenon atoms on a nickel surface.2 Staggering as this was, however, it was hardly a blueprint for an atomic-scale hard drive: the atoms had to be individually dragged into position, and the surface had to be chilled to 4K to calm the thermal motion that would otherwise have jiggled the atoms out of place. ‘That technique has obviously been developed in the 25 years that followed, but actually not by much,’ says physicist Sander Otte of Delft University of Technology in the Netherlands. 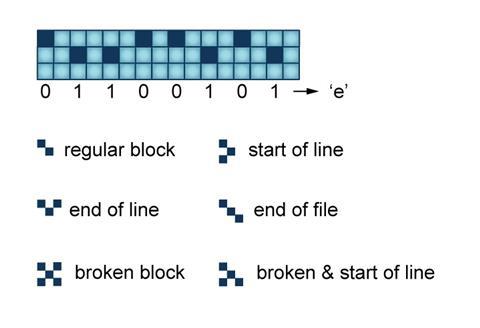 Various markers enable automatic reading and rewriting of the information

In their new work, Otte and colleagues developed a new method. Under ultrahigh vacuum, they evaporated copper(II) chloride powder onto a crystalline copper surface to obtain sub-monolayer coverage of chlorine atoms. By moving the relative positions of the chlorine atoms and the vacancies on the surface, the researchers wrote binary code into the surface: a vacancy positioned above a chlorine atom represented a 0, whereas one positioned underneath a chlorine atom denoted a 1.

This system has several advantages, explains Otte. The ionically-bonded surface is much more thermally stable, and can warm to 77K without thermal effects erasing the encoded data. Furthermore, the vacancies could be controllably moved without needing to grab individual atoms. ‘We inject a current on the interface between the atom and its destination, and then, due to electron–phonon interactions, we locally heat up and provide energy to the system so it can move.’ This allowed them to write a computational algorithm to automate the control of the STM tip. 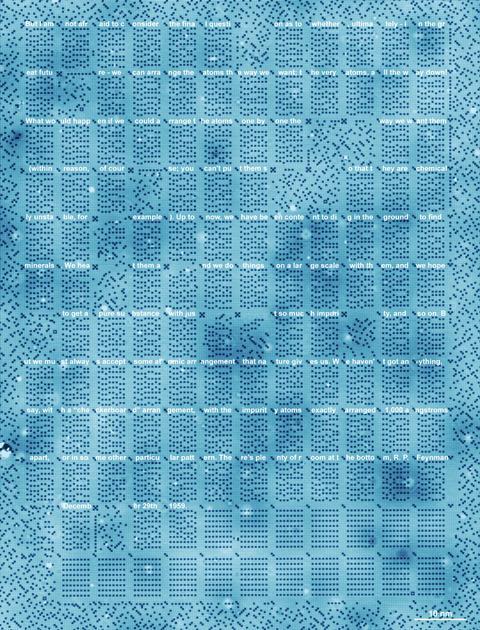 A bit more room at the bottom

‘Until recently, when people did experiments involving atom manipulation … one atom had to be brought to one location by hand,’ says Otte. ‘I like to compare that to monks’ labour, where they had to transcribe books that way. If you use that analogy, what we have here is a printing press.’  The researchers encoded 8000 bits (1 kilobyte) of data at 502 terabits per square inch – information storage 500 times denser than any hard disks available today. They then used this method of storing data to encode the opening passage of Feynman’s famous nanotechnology talk.

The researchers acknowledge that, although the thermal stability of their system means it would not require liquid helium, it would still require liquid nitrogen, compromising its energy efficiency. ‘Our next step will be to explore the other halogens like iodine and bromine,’ says Otte. ‘They’re heavier, so they might have a higher temperature for stability. We could also play with other surfaces.’ In addition, the rates at which data can be written and read, though faster than with previous types of atomic storage, are too slow – at present, it would take over two years to encode a 1 megabyte photograph. The researchers believe that feasible improvements should allow a data reading rate of 1 megabit per second. Ultimately, says Otte, the potential implications of the research may go beyond data storage to encompass alteration of materials’ macroscopic properties by tuning their atomic structures. ‘I think data storage is rather mundane!’

Physicist Franz Himpsel of the University of Wisconsin, Madison in the US describes the work as ‘a real breakthrough’. ‘Everyone previously – myself included – has stored at best [8 bits]’. He believes the underlying chemistry is crucial to this achievement: ‘They found a sweet spot where the binding was just strong enough that [the atoms] could still be written fairly easily at a much higher temperature than in previous atom-moving demos, and yet not so strong that you start destroying your [microscope] tip in the process.’ He cautions, however, that, though the data reading speed can be increased to acceptable rates, ’the biggest handicap is still the slow writing’.