Salt and flavour reach a compromise

Emulsion encapsulates salt and only releases it in the mouth 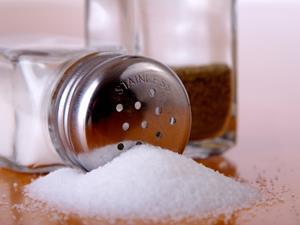 Scientists in the UK have developed a water-in-oil-in-water (wow) emulsion that could cut salt levels in emulsion-based food by more than a fifth but maintain the same flavour.

Excess dietary salt can increase blood pressure – a risk factor for cardiovascular diseases. Processed foods, such as ready-made soups, often contain salt as a preservative and flavour enhancer. However, most of the salt in these emulsion-based foods is swallowed without us actually tasting it, and we often find ourselves adding even more.

Bettina Wolf and coworkers at the University of Nottingham, UK, have taken a microstructure approach to solve this problem. They trapped sodium chloride in the internal aqueous phase of an emulsion made from quinoa starch that had been modified with octenyl succinic anhydride. Salivary enzyme amylase will hydrolyse the starch. This means the salt is released immediately into the mouth, maximising its delivery to taste receptors.

‘Wolf has successfully demonstrated how the interfacial layers of emulsion droplets can be engineered for the targeted release of salt or other tastants, over realistic timescales’, comments food scientist Peter Wilde, from the Institute of Food Research in the UK. ‘This could lead to rationally designed, lower salt foods requiring no artificial taste enhancers or salt replacers.’

Taste tests demonstrated that the salt content of the emulsions could be reduced by 23.7% without participants reporting any difference. In one test volunteers were given two liquid samples containing equal amounts of salt, one containing an orally-inert emulsion, the other, the starch-stabilised emulsion. Despite the samples containing the exact same amount of salt, a significantly greater number of volunteers said that the starch-based emulsion was saltiest.

‘The idea is to remove salt that is not tasted but contributes to the negative health impacts of a high salt diet,’ explains Wolf. ‘The food industry has an opportunity here to develop a range of foods, such as sauces, salad dressings and soups, with reduced salt levels quite quickly using this strategy.’ And by investigating the heating properties of the emulsion Wolf hopes to develop the technology for use in a wider-range of foods.

‘Wow emulsions may prove to be a useful tool for designing emulsified food products with healthier nutrition profiles that still deliver the flavours and textures that consumers expect from traditional emulsified products’, says food rheology expert Helen Joyner, from the University of Idaho, US. She adds that previous research has looked at the potential of this kind of emulsion technology to reduce fat in foods.

Wolf plans to build on this research in a future collaboration with Wilde to apply this starch-stabilised emulsion to sugar.