Alongside inspiring puns for infantile chemistry journalists, scientists in Japan have experimentally demonstrated that a class of heteroles known as arsoles can change colour under pressure. 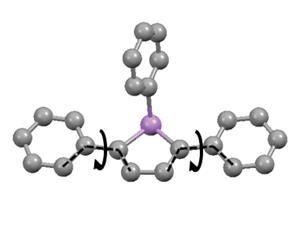 Theorists predicted that these arsenic-containing compounds could form interesting optical and electronic materials, based on their low aromaticity and the high barrier to structural inversion. However, the bottom line in arsole synthesis is that volatile toxic arsenic intermediates have always limited their investigation.

Kensuke Naka and co-workers at Kyoto Institute of Technology sidestepped this problem by using an organoarsenic homocycle to create non-volatile diiodophenyl arsine, which reacts with titanacyclopentadiene to yield 2,5-diarylarsole derivatives. As well as experimentally validating arsoles’ predicted electronic and optical properties, the group discovered mechanochromism in these derivatives.

Crushing 2,5-diarylarsole crystals elicited distinct spectral shifts – changing them from orange to bright yellow. This sets them apart from their more easily obtained phosphole counterparts, which substitute phosphorus for arsenic. The group also showed phospholes to be much less amenable to structural modification using the Suzuki–Miyaura coupling reaction than the highly oxygen-stable arsoles.