Scientists fight back against Romanian reforms

Plans will exclude foreign and overseas academics from research assessments 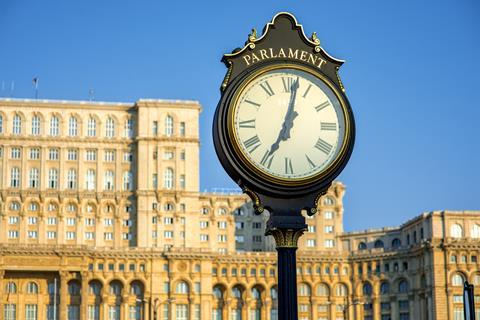 Palace of the parliament in Bucharest, Romania. The government’s research reforms have angered some scientists

The new government of Romania has enacted research policies that critics say will corrupt and politicise funding while further isolating the country’s struggling scientific community.

Mediocre researchers support this, good ones do not

The new policies, decreed by Șerban-Constantin Valeca, minister of research and innovation, include a reorganisation of four independent advisory research councils that focus on strategy, funding, innovation and ethics. The reorganisation included dismissal of many council members who critics contend have been replaced by advisers who are not sufficiently qualified or independent.

Valeca also issued new rules that restrict foreign scientists, as well as Romanians abroad, from serving as funding evaluators for research proposals. Foreign evaluators will be used ‘only if there is no specialist available at the national level in a certain field’, according to the ministry.

Daniel Funeriu, a chemist who served from 2009 to 2012 as Romania’s minister of education and science, tells Chemistry World: ‘This minister wants to allocate research money to their clientele, not to good science. Therefore, all the changes. Mediocre researchers support this, good ones do not.’

Cristian Dogaru, a Romanian born former paediatrician who is now a senior lecturer in early childhood studies at the University of Suffolk, UK, agrees. ‘The new configuration of these advisory councils contains no academics from universities abroad, and a very small number of academics from the five most prestigious universities in Romania,’ says Dogaru, who was a member of the National Scientific Research Council until his dismissal in April as part of the reorganisation. ‘While I do not contest the professionalism of the new members – I do not know them – the move is very suspicious. Given the social democratic government party’s history, it is certainly a political decision of control.’

Asked what he felt needed to be done to improve the research environment in Romania, he said: ‘End corruption.’

The Consortium Universitaria, a group representing Romania’s five leading universities, said in an open letter in late April that ‘we are witnessing in recent months a real assault on efforts by Romanian researchers to maintain high standards of quality research’. In another letter in February, the Consortium Universitaria noted that the four reorganised research advisory boards had been established only last year by the previous government after ‘extensive consultation’ with the scientific community that respected ‘the principles of transparency, meritocracy and integrity’. The universities added: ‘The role of these councils is essential at this time, a period in which the research and scientific community faces many problems related not only to financing, but also from the international community to align practices.’

The Brussels-based European University Association echoed this sentiment, warning that ‘the current changes taking place in Romania will pose serious obstacles to the ability of Romanian universities to fulfill their role domestically as well as internationally.’

Valeca has defended his actions in an open letter, saying they would ‘have a beneficial impact both in academia and in [the] economic development of the country’.

Romania has struggled for years to bolster its research base, which has been suffering from a chronic brain drain and ranks at – or near – the bottom in several areas in Europe, including both private and public sector investment. Attempts at reform in the past have often been met with resistance while successful reforms have been overturned by new governments. One example is science minister Funeriu’s reforms, which were reversed by the incoming government in 2012.

Funeriu, who now serves as high level adviser on education and research reform in Moldova, sees little hope that Valeca will listen to criticism of his policies and reverse course. ‘He does not even understand the concepts of good governance,’ Funeriu says.

Funeriu believes, though, that Romanian prime minister Sorin Mihai Grindeanu might be more receptive to Romania’s researchers. ‘The prime minister may react, since prime-ministers hate bad publicity,’ he says. ‘If he is smart he fires the minister of science.’