Scientists get charged up over titanium dioxide 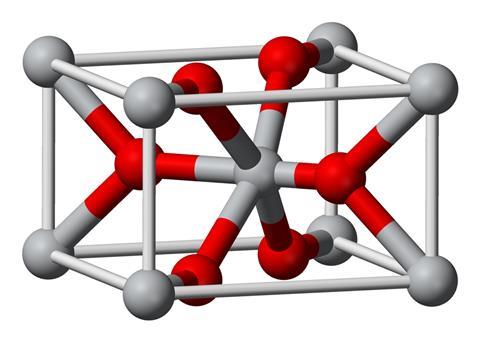 UK scientists are disputing a reassessment of the electronic structure of one of the world’s most common inorganic chemicals, calling it ‘unphysical’. The controversy surrounds titanium dioxide, whose uses range from a pigment in paint and sunscreen to an electronic material in experimental solar cells and batteries.

In March, Daniel Koch and Sergei Manzhos at the National University of Singapore claimed fewer electrons are shared between titanium dioxide’s atoms than previously thought.1 However, Aron Walsh at Imperial College London and colleagues at University College London urge caution in taking these conclusions at face value.

Koch and Manzhos reassessed this picture through charge analysis calculations that seek to determine each atom’s charge state. ‘There is a connection between the charge state and oxidation state, but they are not the same things and the distinction is important,’ Manzhos says. The researchers wanted to formalise what they and others had previously found. ‘We have been seeing computed charges of about +2.5 [on titanium] for a long time, as everybody else did, yet they kept talking about +4,’ he says. ‘We asked ourselves “Is there a way to have 2.5 equal 4?”, and we did not see a way.’

Manzhos suggests that this means the titanium is keeping at least one of the four electrons it’s usually seen as giving away. He explains that he therefore doesn’t believe that the formal oxidation state assignment is much help. ‘I do think that +4 should now be pronounced dead,’ he tells Chemistry World.

Writing in response to the Journal of Chemical Physics Letters, where the original paper was published, Walsh and four other London-based scientists express surprise.2 ‘Oxidation states are alive and well,’ Walsh says. ‘We refer to a range of evidence that stresses the titanium ions in titanium dioxide cannot be further oxidised under regular chemical conditions.’ By contrast a +2.5 charge state suggests room for further oxidation.

The objectors also warn that the charge analysis is misleading as it tries to separate electrons between atoms. ‘The wavefunctions of electrons in solids are multi-centred,’ Walsh explains. ‘To assign a charge to a particular atom in a solid is an ambiguous process.’ He adds that it is important to compare calculations to observations. ‘Partial charges are not an observable property of a material and their values must be interpreted with a degree of caution,’ Walsh says.

Michitoshi Hayashi from National Taiwan University calls the way Koch and Manzhos use both first-principle calculations of atomic-centred orbitals and conventional charge analysis methods ‘interesting’. Hayashi, who has not worked with Walsh or Manzhos’ groups, says it improves the charge distribution and gives a better average electron density than typical quantum chemistry calculations. ‘I anticipated, as I read the article, that some reasonable oxidation state of titanium in solid titanium dioxide would be concluded,’ Hayashi says. However, what he found, he says, he could not agree with. He is therefore glad Walsh and colleagues ‘pay attention not only to what the first principle calculations possibly can do, but also to the physical soundness’ of the calculations.

In reply, Manzhos points to another recent study that reaches a similar conclusion to his and Koch’s in a different way.3 As such he is not currently planning a more detailed response. Instead, Manzhos emphasises that the results imply that titanium atoms can potentially donate further electrons and oxygen atoms accept further electrons. ‘This idea could be used to design new functional materials for sustainable energy conversion and storage,’ he says, although he concedes it may be difficult to achieve in practice.