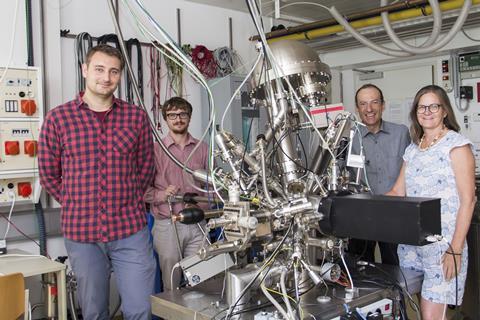 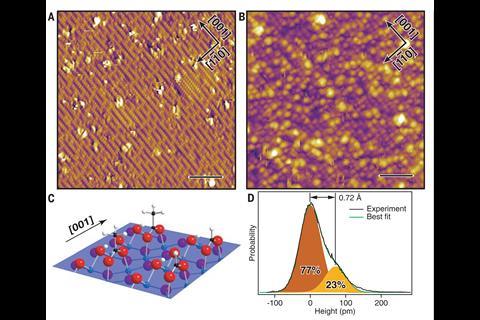 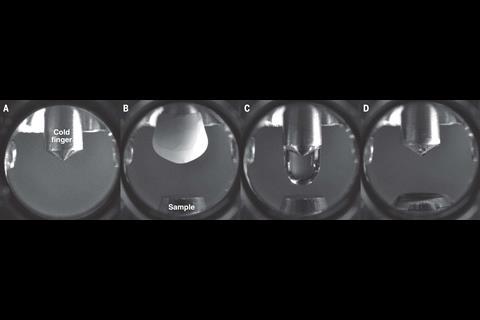 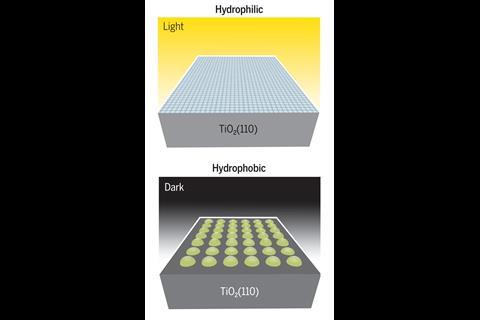 UV light decomposes organic molecules (such as carboxylic acids) on the TiO2 surface, making it hydrophilic. In the dark, the carboxylic acids assemble into an organised monolayer, making the surface hydrophobic

Titanium dioxide cleans itself with the help of organic molecules. The molecules mostly originate from vegetation stuck to TiO2 surfaces, and turn it from hydrophilic to hydrophobic, new research shows.

TiO2 is a white pigment used in paper, paints, medicine, sunscreens and self-cleaning coatings. When exposed to sunlight, the surface reacts with water to generate hydroxy radicals, which break down organic molecules. In the presence of UV, the surfaces are hydrophilic, attracting moisture.

Surfaces slowly return to a hydrophobic state in the dark. Even though TiO2 self-cleaning surfaces have been commercialised, an atomic-scale understanding of their reactivity has proved elusive.

Researchers in Austria and the US now show that TiO2 selectively adsorbs carboxylic acids from air, though present in just parts-per-billion concentrations. The highly ordered single layers formed in darkness are unusual in being hydrophobic and highly water-soluble, which may contribute to the self-cleaning properties of TiO2.

Spectroscopic and scanning electron microscope analysis indicated that the process involved a mixture of formic and acetic acid. These are the dominant sources of acidity in the atmosphere, originating as breakdown products of the volatile compound isoprene emitted by trees and shrubs.

‘Formate and acetate both dissolve in water really well and also stick to the titanium dioxide surface really well,’ says Ulrike Diebold, from the Technical University of Vienna, Austria. ‘They stick via two bonds to the surface and so adhere strongly.’ Each of the two oxygen atoms in the carboxylic acids bonds with a titanium atom on the surface.

The research stemmed partly from a disagreement at a conference, between Diebold and Melissa Hines from Cornell University in the US, over the nature of the organic monolayer. Hines suspected it was made from bicarbonate, partly because carbon dioxide is so common in the atmosphere. The two worked together in Vienna to solve the mystery.

They discovered that just oxygen or just carbon dioxide with water did not cause the ordered organic superstructure to form. ‘When we repeated the same experiment in air we saw the same superstructure. Surprisingly this was true in Vienna, an urban setting, and in Hines’ lab in Ithaca, rural New York,’ Diebold explains.

‘The formation of an ordered monolayer of carboxylic acids is definitely unexpected. The experimental evidence looks quite compelling,’ comments Annabella Selloni, a materials scientist at Princeton University in the US.

The carboxylate monolayers are hydrophobic owing to their CHx-terminated ‘tails,’ and highly water soluble owing to their acidic ‘heads.’ In their hydrophobic state, the monolayers resist contaminant adsorption. However, their high water solubility will cause the surface to become hydrophilic under rinsing, enabling the water sheeting action that is important for self-cleaning.

Diebold stresses their innovation in generating ultra-pure water droplets. They used a ‘cold finger’ steel tipped gadget, frozen to 100K, which allowed them to produce a water droplet in a vacuum chamber and put it on a sample that had now been exposed to air.

‘The ability to study the effect of ‘pure water’ is new. Also new is the identification of the nature of the organic layer. Altogether, this is technically very accomplished work,’ says Selloni.

‘Knowing about this well-defined dirt on the surface changes the way we understand these surfaces in real life,’ adds Diebold. ‘Computer models might contain just TiO2, but this would ignore this overlayer on top of it. Because it adheres so well, it might block some active sites.’