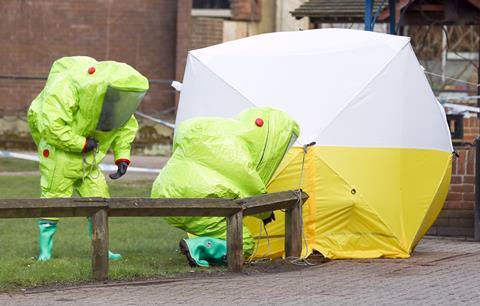 As countries party to the Chemicals Weapons Convention (CWC) gather in The Hague to plan strategy for the next five years, UK experts are warning that the global and scientific communities must regularly review developments in chemistry to prevent their misuse. They also call for tighter rules defining ‘legitimate uses’ and prohibition regimes for certain new chemicals.

Michael Crowley, Lijun Shang and Malcolm Dando at the University of Bradford conclude that chemical and life scientists need to be more aware of the potential misuse of their work. ‘Tomorrow’s weaponeers may well seek to harness the revolutionary advances in the chemical and life sciences and associated disciplines, such as nanoscience and neuroscience, for their malign ends,’ says Crowley. ‘The international governmental and scientific communities must collectively review, update and strengthen the global measures in place.’

While the CWC prohibits misuse of toxic chemicals based on intent, it protects ‘legitimate uses of all toxic chemicals and chemicals from which they can be made’. However, the interpretation of ‘legitimate uses’ is causing concern. The worry is that some nations may be developing chemicals for warfare while cloaking their efforts as legitimate activities such as law enforcement. The authors have specific concerns about riot control agents (RCAs), delivery systems and incapacitating chemical agent (ICA) weapons.

The CWC permits the use of RCAs, such as tear gas and pepper spray, by law enforcement including domestic riot control, but only if there is evidence that such agents are not dangerous when appropriately used. The authors want clarification of what is meant by law enforcement, and the types and quantities of RCAs that can be used legitimately. They also want bans on systems capable of delivering large amounts over wide areas, such as aerial bombs, mortar shells and cluster munitions, as well as defined criteria to ban other systems in development. These include automatic grenade launchers, multi-barrel projectile launchers and unmanned ground or aerial vehicles.

ICAs, including pharmaceuticals that act on the central nervous system (CNS), are another concern. The CWC covers only one agent of this kind – 3-quinuclidinyl benzilate (BZ) and two of its precursors. The authors stress that as scientists’ understanding of the CNS grows, they are likely to uncover many more potential targets and agent classes that might be weaponised. Researchers should be aware of such possibilities and alert the authorities.

The only confirmed large-scale use of ICAs was when Russian security forces employed an aerosolised mixture of two anaesthetics to end the Moscow theatre siege of 2002. 125 of the 900 hostages died. ‘One area of growing concern has been state interest in the aerosolised application of a range of toxic chemical agents,’ comments Dando. ‘Ostensibly promoted for use in extreme law enforcement scenarios, their use in practice poses grave dangers to health. Furthermore, R&D in this area potentially opens up the door to new forms of chemical weapon and warfare.’