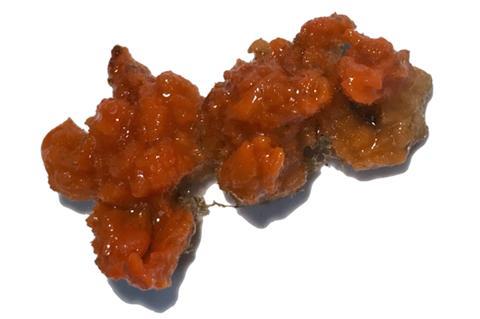 The Axinella sponge that can make unusual bioactive terpenes

Sea sponges, simple animals that fossil evidence shows have been around for about 1.8 billion years, are teeming with unique chemistry. Up until now researchers assumed most of the really interesting chemistry was being carried out by their symbiotic bacteria, but now they’ve discovered that the sponges can produce biologically active compounds that could be drug candidates.

The new work was carried out by Bradley Moore’s marine chemistry and geochemistry lab at the University of California, San Diego’s Scripps Institution of Oceanography in the US and presented at the American Chemical Society’s spring conference held virtually and in-person in San Diego.

A genetic analysis conducted by Kayla Wilson, a PhD student in Moore’s lab, found that a range of unusual nitrogen-containing terpenes produced by the sea sponge Axinella are actually made by the sponge and not its microbes. To study the genetic sequences responsible for making these compounds, Wilson sequenced the sponge’s DNA and that of its microbiome to determine which genes produced the terpenes. To do that she searched for sequences encoding terpene synthase – an enzyme responsible for a key step in terpene production. Together with a colleague who had studied the same enzyme in corals, she concluded that the compounds came from the sponge itself.

Moore says that discovering sponges can make these compounds themselves represents a ‘fundamental shift’ in the field. ‘If this animal is making this funky little terpene, what else are animals making?’ he asks. ‘I think this opens the door to a new emphasis on animals as vessels for drug discovery.’

Paco Cardenas, a sea sponge expert at Uppsala University in Sweden who was not involved in this work, confirms that terpenes are usually produced by plants so it is unusual that these animals are making them. ‘It is surprising, and it is a nice discovery, but we already know that sponges themselves can produce other types of chemistry such as sterols, like cholesterol, and peptides,’ he adds, noting that sea sponges produce the highest diversity of sterols of any animal on Earth, and they make these themselves.

It would be even more exciting if similar compounds are identified that have significant biological activity against bacteria or cancer cells, and they too are determined to be made by sea sponges, Cardenas says. ‘We could then produce substantial amounts of these compounds, and we could move to sponge culture where you take pieces of sponge and let them grow in a seawater aquarium and then cut them again until you get enough biomass to extract your compound of interest,’ he tells Chemistry World.

Vikram Shende, a postdoc in Moore’s lab also discussed his discovery of new compounds from the local Cliona sea sponge at the ACS meeting. Shende and two undergraduate students extracted compounds from 13 species of sponge, and after testing the extracts for biological activity they identified bromine-containing peptides which were shown to inhibit bacteria growth.

Shende and his colleagues are now trying to determine the molecular structure of these peptides, and whether they have potential as an antibiotic. The researchers have yet to determine if these brominated compounds are made by these sponges or the microbes within them.

‘Compounds with bromides are very common with sponges and marine organisms in general, and bromide on peptides has been found but is less common,’ Cardenas points out. ‘If this is a really big peptide then that is quite rare, but there are not many details provided.’

Shende argues that this research and research at Moore’s lab demonstrates why local biodiversity is so crucial. ‘I really want people to take away that it is important to preserve local biodiversity, not only because of environmental reasons but because we have this incredible treasure trove of molecules that might end up making life-saving medicines,’ he said.