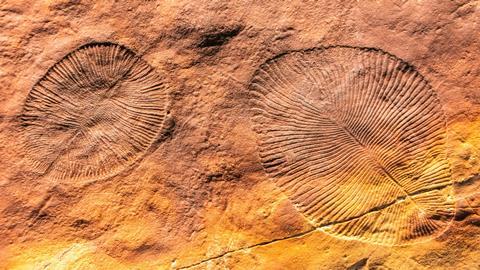 Biomolecules found in 635-million-year-old sediments might not be remnants of Earth’s earliest animals as has been previously claimed, but rather the remains of ancient algae. The discovery means that the oldest evidence of probable animal life is Dickinsonia fossils found in Australia and Russia dated to around 100 million years later.

Pinpointing when the first animals evolved is exceptionally difficult. Molecular clocks, which use the mutation rates of genes to extrapolate last common ancestors, estimate that the organisms all modern animals derive from first emerged 650 to 900 million years ago. Yet the oldest evidence for animal life comes from the beginning of the Cambrian period, around 541 million years ago.

As the earliest animals were likely soft-bodied creatures without shells, teeth, bones or any other structures that could have been easily fossilised, scientists have turned to molecular fossils to look for them. Molecular fossils are compounds stable enough to survive almost unchanged for millions of years – like steranes.

Researchers hypothesised that unusual methylated C30 steranes found in rocks dating back to the Ediacaran period (635 million years ago) indicate that animals emerged at least 100 million years earlier than fossilised remains suggest. The only modern organism producing precursors to these strange steranes are sponges, which are also, evolutionarily speaking, one of the oldest animals – so it’s possible that ancient sponges produced the same compounds. 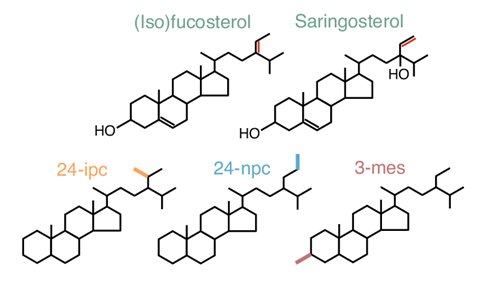 Molecular structure of a range of C30 steranes that were investigated as ’molecular fossils’ of the earliest animals. The latest work suggests that these molecular fossils could have been produced by algae rather than early animals

But now, two research teams have discovered that C30 steranes might not be of animal origin but might come from ancient algae, with the compounds’ unusual substitution pattern byproducts of geological alteration.1,2 Green and brown marine algae were common in the Ediacaran period and earlier.

To simulate what happens to organic matter when it is buried in sediments, the researchers heated algal extracts or pure steroids alongside graphite in closed vessels at 300°C for a day. To the scientists’ surprise, some of the compounds underwent methylation, producing the same unusual C30 steranes thought to only be produced by sponges. ‘We’ve correlated them in these ancient Precambrian sequences and they show exactly the same abundances, which suggests to us that they are derived through these processes,’ explains Lennart van Maldegem at the Australian National University who led one of the studies1 together with Christian Hallmann from the Max Planck Institute for Biogeochemistry, Germany.

‘We’re not saying it wasn’t sponges or it wasn’t protists [non-animal organisms that also produce small amounts of C30 steranes]3, we just say we have to be agnostic in this regard,’ says Hallmann. ‘We think that the safest thing to do right now is to indeed not use molecular fossils anymore as a collaboration point for earliest animals, but to revert back to the earliest [body] fossils.’

Nothing but the truth

‘[The] paper brings us a little closer to the truth but not the whole truth,’ says Kliti Grice, an organic geochemist at Curtin University in Australia. ‘It could be that algae or primitive organisms make specific biochemicals in a response to the stressful environmental conditions.’ The way forward would be to analyse the organic matter in sedimentary deposits with methods such as elemental analysis, stable carbon isotope ratio, nuclear magnetic resonance and Raman spectroscopy,4 she points out. Thermal decomposition experiments in the presence of water could also help reveal how steroids change in sediments over millions of years.5

Two of the researchers who initially came up with the sponge hypothesis are doubtful whether the experiments are realistic. ‘Diagenesis [sediments turning into rock] is a low temperature process yet they are using high temperatures, a closed system with no water and no hydrogen donor in there,’ says Gordon Love from the University of California, Riverside, in the US. While this exaggerates the amounts of secondary products that would occur naturally, the experiments only produce trace amounts of C30 steranes, often as part of a complex mixture with many unidentified products, he explains.

Roger Summons from the Massachusetts Institute of Technology, US, adds that the studies ‘use a very specific mass spectrometry approach to wiggle match with natural samples’. His team is now working on experiments he thinks more closely mimic natural diagenesis and compare the reaction products with the ones obtained in the current studies.

Van Maldegem hopes that future body fossil findings might clear up any uncertainties. Pinpointing animal’s origin not only provides a viewing window into our own evolution, he says, it could also be useful for finding life on other planets. ‘Early Earth was a completely different planet, 2% oxygen, no life on land whatsoever. How does it evolve from there?’

Update: An additional sentence on thermal decomposition of steroids and reference 5 were added on 9 December 2020