It is soft, strong and very, very long. Chinese chemists have created metres of a yarn that self-assembles from nothing more than a mixture of simple monomers in water.

Carbon nanotubes can already be spun into yarns to make extremely strong threads. Supramolecular nanotubes, formed by molecules spontaneously linking up through non-covalent bonds, could offer a simpler, low-cost alternative – if only they weren’t so fragile. ‘Soft supramolecular nanotubes have proved to be very difficult to spin,’ says Minghua Liu at the Chinese Academy of Sciences’ Institute of Chemistry in Beijing.

Liu’s team has now built a much stronger supramolecular yarn from monomers of N,N -eicosanedioyl-di-L-histidine – essentially a long carbon chain with a histidine at each end. Mixed into slightly alkaline water, the molecules assemble themselves into flat sheets, which then roll up into nanotubes that are about 40nm wide and several hundred micrometres long.

When the researchers dipped a needle into the mixture they were able to slowly draw out a continuous yarn of thousands of nanotubes bundled together. Using an electric motor and a spool, the scientists could pull out metre-long yarns – several of these can be twisted together to make a helical thread.

‘The great thing here is that it is done simply, from a small molecule – up to now the best results were achieved with quite complex supramolecular “monomers”,’ says David Amabilino at the Materials Science Institute of Barcelona in Spain, who studies supramolecular self-assembly. It’s ‘certainly a very significant breakthrough’, he adds. 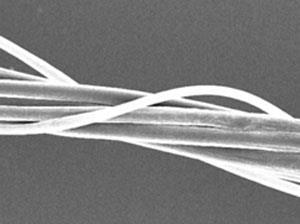 The nanotube yarn can be spun into a thread

The yarn is a few micrometres wide, and once dried has a remarkable tensile strength of about 50MPa, comparable to polypropylene. The chemists suggest that the supramolecular nanotubes are held together by hydrogen bonding between the monomer’s amide groups, and hydrophobic interactions between its long alkyl chains.

‘This is the first type of supramolecular polymer fibre with such good mechanical properties and shows that small molecules and summing non-covalent interactions can lead to robust materials,’ says Amabilino.

Liu expects that the threads will be biocompatible and hopes to test them as a scaffold for growing cells. For example, it might serve as a template for repairing nerves, says Liu: ‘In the axons of nerve cells in the human body, microtubules assemble into long fibers to perform their functions, which have similar architecture to our nanotube yarns.’ Once tissue growth is underway, the supramolecular network could be disassembled, perhaps by changing the pH.

The tubes might also be used to carry or separate molecules. Liu’s team showed that a toluene solution of fluorescent molecule tetraphenylporphyrin could travel more than 1cm per hour along the tube. And as the nanotubes are chiral, ‘they may be useful for chiral recognition or separation’, he suggests. His team is now developing a range of similar yarns by tweaking the monomer building blocks and varying the self-assembly conditions.