Single-molecule switch flipped on and off by light 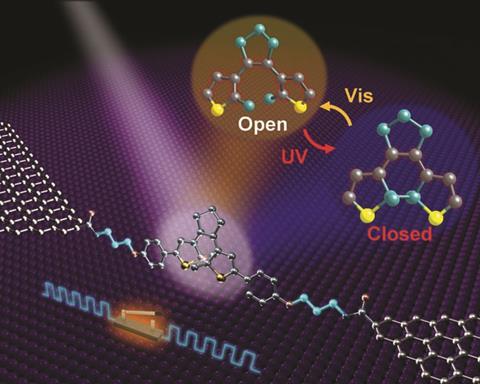 Researchers have produced a photoswitch comprising just one photosensitive molecule whose electrical conductivity can be turned on and off by light.1 The device may, with further development, have potential in solar energy harvesting and light-sensing applications. It may also be useful in biomedical electronics and optical logic, in which light replaces electrical signals to transmit information.

In the ongoing quest to miniaturise electronics, one ambitious frontier – molecular electronics – involves constructing electronic circuits and devices from individual molecules. Several groups have investigated single-molecule switches. Diarylethenes can exist in either a closed form in which they conduct electricity or an open form in which they are insulators. The free molecule opens when it absorbs a visible photon and closes on absorption of UV. In principle, this allows for a light-sensitive switch.

In 2003, however, researchers at the University of Groningen in the Netherlands who mounted single molecules of diarylethene between gold electrodes found that, even though the switches could be turned off by visible light, they could not then be turned back on by ultraviolet.2 Conversely, researchers using carbon nanotube or graphene electrodes have subsequently reported that the switches become stuck in the ‘on’ position.3 The problems have been attributed to interactions between the electrodes and the molecules that stabilize one state, preventing the molecule switching.

Using another group’s theoretical analysis, researchers led by Xuefeng Guo of Peking University in Beijing – who carried out the previous work on graphene and nanotube electrodes – calculated that inserting three methylene groups between each graphene electrode and the diarylethene molecule would reduce the interaction between the electronic clouds just enough that, though the molecule would be stable in either configuration, it could still be switched by light. They used a combination of chemical vapour deposition, electron beam lithography and other techniques to fabricate 46 such devices. ‘All the devices showed reversible switching properties,’ says Guo. They were stable for over a year and could consistently be switched on and off more than 100 times. The researchers are now investigating the switchable quantum effects in detail. ‘We’re also interested to see whether we can combine several different molecules to do multi-level switching, for example,’ says Guo’s colleague Hongqi Xu.

‘In many cases, molecular junctions have lives of minutes, hours, or in fortunate cases days, but no more,’ says Ioan Bâldea of the University of Heidelberg, Germany, who was not involved in the work. ’The fact that here they have switches stable over a year is fantastic! I can’t say in which field there will be the strongest impact, but I’m certain there will be an impact.’