Introducing carboxybetaine groups into polyurethane to create a zwitterionic polymer has resulted in a material that resists biofilm growth for six months.1 Making medical devices such as catheters from the polymer could reduce the number of patients that develop associated infections.

Biofilms naturally form when microorganisms land on surfaces. The microorganisms build up into a structured community embedded in a matrix of extracellular polymeric substances. Around 80% of human bacterial infections involve biofilms and their structure makes them highly tolerant to antibiotics.

Many research groups are therefore developing surfaces that microorganisms can’t stick to. In 2007, zwitterionic polymers emerged as an exciting possibility after Gang Cheng and his colleagues at the University of Washington, US, demonstrated they could resist biofilm growth for 10 days.2 The polymer surface resists bacterial adhesion by forming a moisture layer on top, which acts as a physical barrier. However, these materials have mechanical problems, preventing their use in real-world applications.

Now at the University of Illinois at Chicago, Cheng has addressed this by tweaking the anti-fouling properties of a common material, polyurethane. ‘Our strategy incorporates a carboxybetaine precursor into polyurethane as a new component or replaces one of the ingredients in the polyurethane synthesis. The synthesis is very simple and the reactants are very, very cheap. Another nice property about this material is that it can be processed by injection moulding or other traditional polymer processing methods.’

The carboxybetaine precursors provide anti-fouling properties by undergoing rapid, self-catalysed hydrolysis to produce a bacteria-repelling zwitterionic layer. Combined with the tuneable mechanical properties of polyurethane, the team have produced a surface that can be adapted for different applications. Previous studies assessed biofilm growth over 24 hours, with the longest study showing two weeks without growth. Gang’s team tested the material in a nutrient-rich medium during six months of constant exposure to Pseudomonas aeruginosa and Staphylococcus epidermidis and found it completely prevented biofilms from growing. 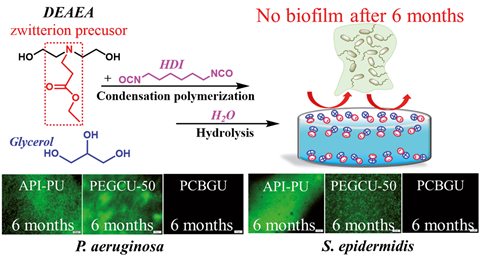 ‘Zero biofilm formation after six months is indeed impressive,’ comments chemical engineer Robert Langer from Massachusetts Institute of Techonology in the US. ‘The method also appears easy to use. Pseudomonas aeruginosa and Staphylococcus epidermidis are relevant for biomedical applications and so these are really significant results.’

Currently, patients don’t keep the same urinary catheter for more than three months and replacing them can be painful. Gang is optimistic that the new material might allow medical devices to stay in for longer. ‘This material will significantly reduce the rate of medical device-associated infections. If we can solve the biofilm issue, we can reduce the suffering of patients and save lots of lives.’

‘We also showed that the material can delay blood coagulation, meaning patients wouldn’t have to take anti-coagulant drugs to prevent medical device-induced thrombosis,’ adds Gang. The team also suggest it could have environmental applications as an anti-fouling component in marine coatings.

‘This is a potentially important contribution since the development of anti-fouling surfaces has been a holy grail in both microbiology and materials science for decades,’ says David Williams, the former editor-in-chief of the journal Biomaterials, who works at the Wake Forest Institute of Regenerative Medicine in the US. ‘We have known about the resistance of some zwitterionic polymers to biofilm formation, but this is the first time this property has been incorporated into engineering polymers such as this polyurethane.’

Gang’s team is now focusing on adapting the material and testing it for different applications. ‘This direct work took us three years, but it has taken 10 years of our previous ideas for us to reach this, we also stand on the work of the pioneers in the field. Now we are very close to solving this long-standing problem.’