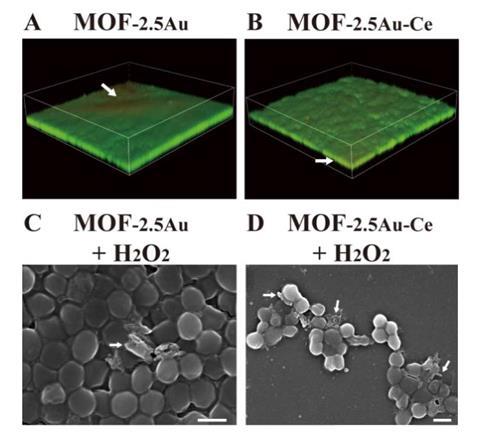 Penentration of MOF nanozymes with gold (left) and with gold and cerium (right) into biofilms in the presence of hydrogen peroxide. The cerium-based nanozyme is significantly better at destroying biofilms

Metal–organic frameworks (MOFs) have been combined with a cerium compound to create a nanozyme capable of eradicating bacterial biofilms. The approach was successful in in vivo tests and could be an alternative to antibiotics.

Biofilms consist of highly organised bacterial communities, bound together by a matrix of biological compounds. They build up on surfaces and encase bacterial cells, protecting them. As a result, biofilms make bacteria significantly more difficult to kill and more dangerous to patients – roughly 80% of human bacterial infections involve biofilms.

To combat biofilms, the team from the Chinese Academy of Sciences sought out compounds that could break down extracellular DNA (eDNA), an important component of the film’s matrix. One option was the natural enzyme deoxyribonuclease (DNase), which can hydrolyse DNA. However, it is very expensive and suffers from stability problems outside of its natural environment. Instead, the team turned to a cerium complex that they believed would break down eDNA, as prior research has shown metal complexes can hydrolyse DNA and RNA.

The team was also hoping to identify a way of killing the bacteria in the biofilm without using antibiotics. The researchers turned to a MOF that demonstrates peroxidase-like activity in the presence of hydrogen peroxide. This enzymatic-mimicry converts H2O2 into ·OH radicals, which are highly antibacterial.

The researchers found that the MOF–cerium-based nanozyme could eradicate biofilms on static surfaces. They also performed in vivo testing of the nanozyme on subcutaneous abscesses in mice infected with Staphylococcus aureus and showed that it could eradicate all the colonies.