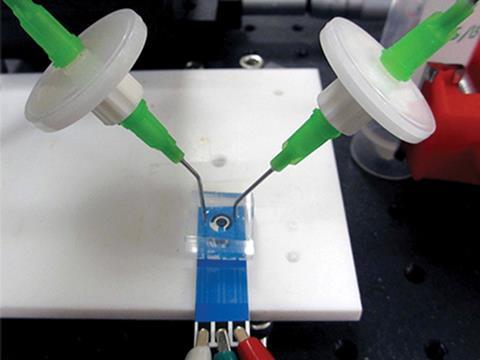 Scientists in the US have designed a simple and inexpensive electrochemical device that monitors bacteria metabolites to gauge the effect of antibiotics.

A biofilm is made up of live cells surrounded by extracellular DNA, proteins and other substances, and is often the most difficult aspect of an infection to treat. Some devices have been made to analyse biofilm viability but these require specialised, expensive equipment. Now, Edgar Goluch and his team at Northeastern University in Boston, US, have designed an electrochemical device to monitor pyocyanin, a metabolite produced by Pseudomonas aeruginosa biofilms.

The team’s device consists of a growth chamber containing trypticase soy broth and carbon electrodes that the bacteria grow on for 24 hours. An inlet and outlet allow a mixture of more of the broth and the antibiotic colistin sulfate to be pumped through. Square wave voltammetry measurements were taken every 30 minutes for 48 hours and it was found that the electrical signal drop correlated with the viability of P. aeruginosa cells within the biofilm.

‘Understanding and overcoming antibiotic resistance is currently recognised as one of today’s major challenges for scientists,’ explains bioanalytical expert Dana Spence from Michigan State University in the US. ‘This work is a step in that direction, especially considering that the electrochemical approach requires no luminescent or radioactive tags to determine the bacterial marker of interest.’

‘Ultimately, I hope my research will change how doctors diagnose bacterial infections and allow doctors to stop using broad-spectrum antibiotic cocktails,’ comments Goluch. The team is now searching for more biofilm metabolites to make devices that can identify Staphylococcus, Streptococcus, and other bacterial pathogens.