Smoking out the chemistry of wildfires 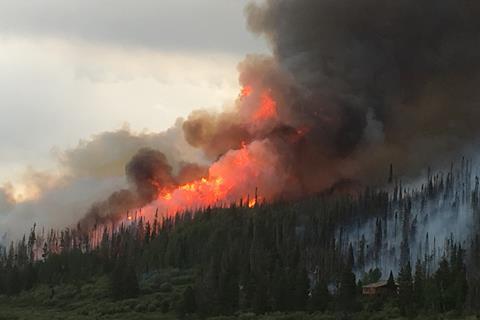 As deadly wildfires continue to sweep through parts of the US, the government has initiated a project to characterise the chemistry of wildfires across western regions this summer, with 15 to 20 smoke observation flights out of Boise, Idaho.

The effort, which began on 25 July and will continue through late August, involves flying two specially equipped planes directly into, above and below smoke plumes to measure their gas and aerosol emissions. The goal is to understand the chemical changes that wildfires undergo over time and how their properties might vary, as well as their environmental consequences.

The US National Science Foundation (NSF) is leading the study, called Western Wildfire Experiment for Cloud Chemistry, Aerosol Absorption and Nitrogen (We-can). The agency is spending about $10 million (£7.77 million) to cover the personnel and infrastructure costs of the project. It will involve the NSF’s C-130 research aircraft, equipped with scientific instruments and room for 18 scientists, and the University of Wyoming King Air, a cargo plane that is configured to measure cloud properties, air motion, turbulence and fluxes, atmospheric chemistry and aerosols. All of the data that is collected will likely take several years to process and analyse.

‘We hope that this research will lead to a better understanding of the nature of wildfire emissions and their impacts on human health and the environment, and to improvements in predicting when and where wildfires will occur and how they might move and spread over time,’ explains Sylvia Edgerton, the study’s NSF programme manager. ‘These improvements could help to reduce health impacts and deaths that occur due to forest fires and reduce the loss of property and forest habitat,’ she adds.

Concurrent with the wildfire smoke sampling by aircraft, a ground-based component of the study will measure the surface impacts of wildfire smoke in the Pacific Northwest. Researchers will assess emissions of non-methane organic gases, and evaluate the optical properties of aerosol emissions from these natural disasters. The intent is to guide the cargo planes to prime data-collecting zones, and produce information that can lead to more accurate modelling of biomass burning emissions to the atmosphere, for example, and help reduce exposures to harmful pollutants.

Although many laboratory studies have previously examined the composition and properties of smoke, there has been very little research into wildfires, according to Edgerton. ‘This NSF-supported field campaign is unique because of the extensive instrumentation that is being used both in the air and on the ground to measure compounds whose chemistry has never been studied in smoke plumes before,’ she says.

Understanding the chemistry in wildfire smoke has significant implications for air quality, nutrient cycles, weather and climate. Specifically, investigators will focus on answering scientific questions related to fixed nitrogen, absorbing aerosols, as well as cloud activation and chemistry in wildfires.

This research project is underway as California fights the largest wildfire in its history, which spans an estimated 1217km2. The increasing prevalence of drought and reduced rainfall in parts of western America have raised the probability of wildfires, and Edgerton notes that the frequency and duration of large wildfires have increased markedly since the mid-1980s.

The financial impact of fires can be staggering. Analysis by the US National Institute of Standards and Technology places the annualised economic burden from wildfire in the US at between $71.1 billion and $347.8 billion. Beyond economics, there are significant health effects associated with wildfire smoke exposure, and the US National Safety Council lists death by fires as the second most common cause of ‘preventable deaths’ after automobile accidents.

The We-can researchers argue that improved predictions of wildfire occurrence and movement, paired with better warning systems, will significantly reduce loss of life and property.