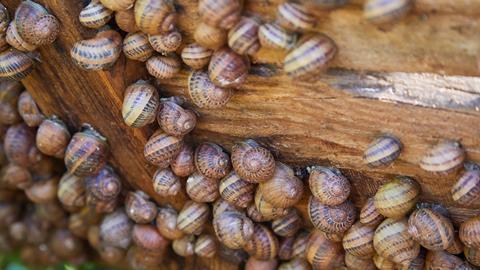 Snail mucus has recently gained attention as an ingredient in expensive beauty products, as its protein content seems to play a role in reducing inflammation and improving hydration. Likewise, scientists have demonstrated gold nanomaterial-based therapies in a range of biomedical fields, including wound healing and skin tissue engineering.

Now, a team around Pinalysa Cosma, of the University of Bari in Italy, has brought snail mucus and gold nanoparticles together for the first time. The project started when the team realised that components in snail mucus could reduce an aqueous solution of a gold precursor. That precursor, tetrachloroauric acid, induces the formation of nanostructured systems called gold nanoparticles. And the mucus forms a stabilising layer around the nanoparticles, combining the beneficial properties of both.

The mucus comes from the common garden snail Helix aspersa Müller. To harvest their slime, the snails were placed in a machine that sprays them with ozone. Cosma says this method retains all the beneficial properties of the slime without harming the snail.

Scratch assays using human keratinocytes showed that treating a wound with the nanoparticles accelerated wound closure compared with an untreated wound. And tests using macrophages from mice suggest the nanoparticles have anti-inflammatory properties.

Many methods for synthesising gold nanoparticles require harsh chemical conditions and produce toxic byproducts. Cosma says the ideal synthesis for such nanoparticles should be at room temperature, without further manipulating the sample. ‘The goal has been thus obtained with our work, with the simple mix of snail slime and tetrachloroauric acid, according to green chemistry and green economy principles.’

‘We think that our research should have a great impact not only on biomedical applications but also in the cosmetic field,’ adds Cosma. ‘The combined use of gold nanoparticles, well-known antibacterial agents, and snail slime could be a potential functional ingredient in the treatment of acne or used as a preservative in cosmetic product formulation.’

Alan Gunn, who studies the properties of snail mucus at Liverpool John Moores University in the UK, says that the results are very promising. ‘It would be really nice to know whether the snail slime–gold nanoparticles express any antibiotic properties. If the nanoparticles are capable of simultaneously promoting healing and inhibiting microbes then this would be a remarkable result.’