Solar hydrogen production on a roll with 2D films 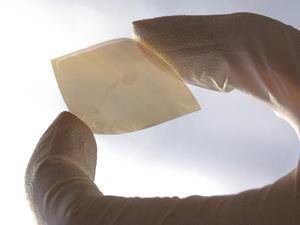 Swiss researchers have developed an affordable and scalable way to make atom thin films of tungsten diselenide for converting solar energy into hydrogen. The method, which exploits the interface of two layers of liquid to act as a ‘rolling pin’ to form the films, could bring the goal of cheap solar cells for hydrogen production a step closer.

In recent years, two-dimensional transition metal dichalcogenides including molybdenum disulfide and tungsten diselenide have been used to demonstrate atom thin solar cells, but devices were only a few square micrometres in size. These cells have also been coupled with catalysts that can harness the excited electrons produced to reduce water to hydrogen. However, preparing large sheets of these two-dimensional materials has remained a challenge for this technology.

Kevin Sivula and colleagues at the Swiss Federal Institute of Technology (EPFL) noticed that, despite all of the interest in two-dimensional transition metal dichalcogenides, there was no way to make good quality thin films of these materials by solution-processing techniques, which would enable rapid roll-to-roll printing. So his team set out to find one.

They first mixed tungsten diselenide powder with a liquid solvent and used sonic vibrations to exfoliate the material into thin two-dimensional flakes. The flakes were then stabilised and dispersed by adding solvents. The researchers then injected the tungsten diselenide flakes into the boundary between two immiscible liquids. Wedged between this interface the flakes were rolled out to form an even and high-quality thin film.

‘The key to enabling the good film formation in our technique was identifying the right solvents to process the 2D flakes,’ explains Sivula. ‘We reasoned that using two non-solvents for the tungsten diselenide flakes would better confine them to the liquid–liquid interface.’

The films were then transferred to plastic supports to test their solar to hydrogen conversion efficiency, which only reached around 1%. Previously, 7% solar to hydrogen conversion has been demonstrated in a single crystal photoelectrode made from tungsten diselenide, and up to 14% conversion of red light to electricity has been achieved in a tungsten diselenide regenerative photoelectrochemical cell. With further work, Sivula thinks its entirely possible his films could achieve similar performance to the single crystal devices.

However, John Turner, who investigates hydrogen energy at the US government’s National Renewable Energy Laboratory, is unimpressed. ‘Bottom line, tungsten diselenide has already been done and although they have a clever synthesis technique, I don’t see how they get to the much higher currents that are necessary for a viable device.’ He adds that there are probably other synthesis techniques that can produce the material more cheaply.

Sivula agrees that improvement is needed but argues that it is difficult to imagine a less-expensive technique than solution-based processing. ‘Our demonstration represents only the first instance where tungsten diselenide can be solution processed into thin films with a measureable performance,’ he says. He adds that his lab is now using common strategies to improve device performance with a view to improving solar to hydrogen conversion efficiency.