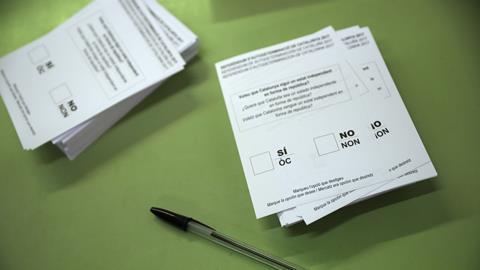 'Sorry, the Spanish government has frozen your university's bank account'

Imagine the situation: ‘Sorry, your bank has blocked this credit card, please try another one.’ So you try another one, and another, until you’ve tried them all – each one returning the same message. Then you go to the bank, only to find that all your bank accounts have been frozen too, and all within a couple of days. It would be a traumatic experience. Now imagine that this happened to dozens of universities and research centres instead.

Last week, the budgetary powers of Catalonia’s public institutions, which sadly included the more than 40 centres in Cerca (the organisation of Catalan research centres), were cut by the Spanish Ministry of Finance and Civil Service.

The restrictions were applied to institutions ‘suspected of being liable to fraudulent behaviour’, in response to the Catalan government’s decision to hold a referendum on separating from Spain. Now, after the referendum took place last Sunday, the situation remains unchanged; credit cards don’t work, bank accounts are blocked. Every single payment has to be approved in Madrid.

In many cases, this is merely an inconvenience, resulting in a few days’ delay getting the money to its destination. Yet suppliers start to complain, trips to conferences can’t be booked, some shipments are delayed. These bureaucratic hurdles needlessly hamper the research of in an area of Spain responsible for more than a quarter of the country’s scientific output.

Cerca research centres, together with most Catalan universities, issued a public statement last week, demanding that the Spanish government immediately withdraw its control over their accounts. The message was sent to the European authorities as well; much of the research funding the region receives comes from Brussels – in 2015, around 65% of all European Research Council grantees in Spain were in Catalonia.

The situation may soon get worse if the Catalan government goes ahead with its announcement to declare independence. In that case, according to the Spanish constitution, Prime Minister Mariano Rajoy could revoke Catalonia’s autonomy and take full control of the region.

The research programme in Catalonia, conceived by Andreu Mas-Colell almost 20 years ago, is still admired in Spain and around the world. The Catalan government tries to attract young, talented researchers as well as retain established scientists in the region. To do so, they rely not only on public funds but also on a network of benefactors and sponsors ranging from philanthropists to companies and financial institutions. All of this creates a fertile breeding ground for excellent research, innovative spin-offs and opportunities for collaboration. However, while our accounts are blocked it isn’t just funding from the Spanish government that we can’t access – it’s all the money that’s been raised from these private and charitable sources.

Here at the Institute of Chemical Research of Catalonia (ICIQ), we are advising our researchers to stay calm. The situation may be uncertain, but researchers will be paid and the labs will keep running. There may be some delays due to the extraordinary amount of paperwork required at the moment, but negotiations are taking place to ease the process as much as possible.

Of course, science and scientists do not exist in isolation, separate from the communities and countries they inhabit. But equally, research should not be allowed to become a casualty of the political wars behind the process of independence. Scientific centres should be able to keep using their funds freely, no matter where these funds come from.