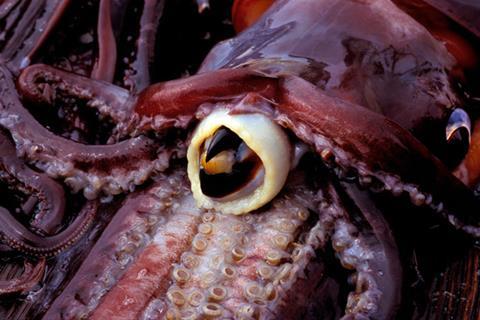 Inspired by squid beak, researchers in the US have created a lightweight composite from naturally abundant components that can be rigid at one end yet bendy at the other.

With a chitin beak and serrated chitin teeth on their arms and tentacles, nothing showcases biopolymer versatility quite like the giant squid. Unlike many strong biological materials, such as nacre in pearls or chiton mollusc teeth made of magnetite, chitin is devoid of metals and derives its extreme properties solely from organic molecules.

Marco Rolandi and co-workers at the University of California, Santa Cruz, and the University of Washington, Seattle, have looked to this natural phenomenon in devising lightweight materials with exceptional mechanical properties. The group cross-linked a de-acetylated form of chitin, called chitosan, with the catecholamine precursor l-dopa. This yielded ChitoDX – an organic composite that, for its weight, dwarfs architectural aluminium alloys in strength.

Natural chitin materials gain strength and stiffness through a tanning process, in which the enzyme tyrosinase progressively oxidises precursors, causing the material to darken as molecules cross-link. Rolandi’s group substituted tyrosinase for NaIO4 and could vary the stiffness along a single piece of ChitoDX by changing the amount of this oxidising agent. Such an effect is seen in squid beaks, which are soft enough at one end to prevent damage to the squid tissue but stiff enough at the other to function like scissors. 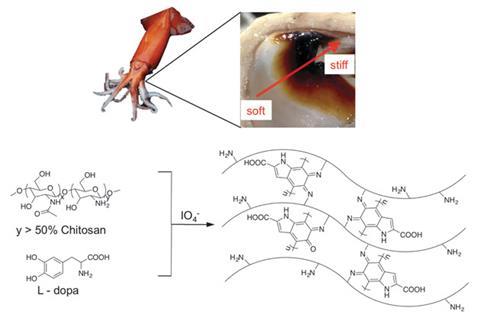 By varying the amount of periodate oxidant, Rolandi's team tuned their polymer's level of cross-linking, creating their squid

‘Chitosan is water soluble and our chemistry is water based, so our material is easy to process,’ says Rolandi, highlighting the advantages of working with chitosan over chitin, which is insoluble in most organic solvents. His group sees promise in this composite for developing an ‘environmentally friendly plastic’, with applications in bridging mechanically mismatched materials or as a substrate for culturing and studying tissue with a mechanical gradient.

Kristopher Kilian at the University of Illinois at Urbana–Champaign, US, works in biomaterials research and describes this as a ‘straightforward technique that may prove general to other materials as a route to engineering mechanical gradients into soft materials for tissue engineering.’

The team believes there is plenty of scope for developing this composite further by tuning the chitosan chemistry and exploring its self-assembly into nanofibres. As Rolandi points out, ‘natural evolution has perfected squid beaks for millions of years – Xiaolin, the lead graduate student on the work, has so far only had about one year to develop this composite.’