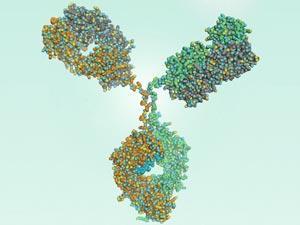 The antibody NIST RM 8671 was donated by AstraZeneca subsidiary MedImmune

The US National Institute of Standards and Technology (NIST) has validated a standard reference material for monoclonal antibody (mAb) studies.

The comprehensively characterised antibody is intended to be used primarily to evaluate the performance of analytical methods for determining physicochemical and biophysical attributes of other monoclonal antibodies. It also provides a representative test molecule for developing new technology for therapeutic protein characterisation.

The antibody, dubbed NIST RM 8671, was donated by AstraZeneca subsidiary MedImmune, then characterised by NIST and collaborators. ‘Ultimately we hope the molecule serves as a neutral test case, allowing open discussion of analytical and biophysical technologies, thereby opening a medium for free discussion between instrument vendors, biopharmaceutical developers, and regulators,’ says John Schiel, a research chemist at NIST who led the international effort to explore and demonstrate uses of the reference mAb.

NIST says that RM 8671 is the most widely characterised and openly available monoclonal antibody, and that it is intended for open innovation. All of the results that it yields can be freely published and discussed. In addition, the material has been extensively studied at NIST and used as a platform to develop new analytical methods in areas like nuclear magnetic resonance spectroscopy and neutron scattering.

Several antibody research probes have come under fire recently for poor quality and reproducibility in experiments. Schiel points out that this has been mostly directed at polyclonal antibodies or monoclonals not intended for therapeutic use. Such materials are often expressed in live animals, rather than the mammalian cell cultures used to produce therapeutic mAbs, and are not regulated by the same stringent quality standards. Research probes are commonly tested for binding to an antigen, but stability and consistency is not as controlled or tested.

Schiel suggests that NIST’s new mAb may be useful as a standard to build more analytical and biophysical assays into the quality control systems for these products, especially for stability.