Pharma firms AstraZeneca and Daiichi Sankyo are betting on a new class of cancer drug known as antibody–drug conjugates or ADCs – and the firms are coming up trumps. In January, the partners’ drug Enhertu (trastuzumab deruxtecan) was approved by US regulators for HER2-positive gastric cancer, following the drug’s 2019 approval for HER2-positive breast cancer. Enhertu is deemed hot stuff – industry experts believe it could pull in upwards of $4 billion (£2.8 billion)  a year.

For AZ, these next-generation cancer drugs – which couple the targeting power of a monoclonal antibody with a potent cytotoxic drug – have ‘significant potential’ in treating cancer and promise to be big business. According to a company spokesperson, the firm is committed to investing in ADCs, which now form a core part of the company’s multi-pronged approach in cancer treatments. ‘We see a future where ADCs become a cornerstone of therapy in multiple cancer settings,’ the spokesperson told Chemistry World.

The belief that ADCs are the next big thing in cancer is a stance many in the industry are starting to adopt. Since the first ADC was approved in 2000, 10 of these enhanced antibodies have reached the market – seven of which have been approved since 2017. And activity in the space is booming. September last year saw Gilead acquire US ADC developer Immunomedics for $21 billion, while Merck paid $2.75 billion for ADC firm VelosBio in November, and in December, German firm Boehringer Ingelheim snapped up Swiss ADC company NBE-Therapeutics for €1.18 billion (£1 billion). Since 2012, more than 60 partnerships have been established, with around 60% of those deals taking place since 2015, pharma consultants Roots Analysis report.

Meanwhile, several companies, including Sterling Pharma Solutions, Lonza and Merck KGaA’s MilliporeSigma unit, are expanding their manufacturing capacities through acquisitions, facility purchases and new buildings. That’s because ADC pipelines are bulging. According to Roots Analysis, around 250 ADCs are currently under development – a three-fold rise in just the last five years – with nearly 40% of these in clinical development. This boom can be seen with patents – in 2009, just 1395 patents had been filed or granted for ADCs; by the first half of 2019 that had reached more than 16,500, the consultants say. Back in 2015 the ADC market was worth approximately $900 million. Now Roots Analysis predicts the market will grow more than 20% annually and be worth more than $15 billion by 2030.

According to the consultants, more than 115 pharma companies have now moved into the area of ADC development. ‘New entrants are entering this space and many companies are putting in significant efforts and capital towards extending their capabilities and enhancing their services, including strategic alliances,’ the consultants say in a recent report on the market.

This interest in ADCs results from a growing focus on cancer immunotherapeutics and scientific advances, says Anoop Menon, senior research analyst at the Economist Intelligence Unit. ‘The sector has matured in the past few years with the approval of candidates from Pfizer, Roche and, most recently, AstraZeneca. This has driven confidence in the drug class and further development.’ And given the blockbuster potential, more companies are looking for deals and partnership opportunities, he adds.

From concept to reality

A brief history of antibody–drug conjugates 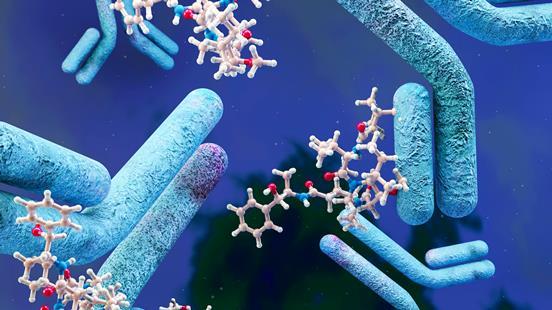 ADC made by linking methotrexate to an antibody targeting leukemia cells

Monoclonal antibodies made to order

César Milstein and Georges Köhler developed the hybridoma technique - a method for generating large amounts of monoclonal antibodies with predetermined specificity. This breakthrough, alongside later advances in antibody engineering, was central to the development of therapeutic antibodies. Milstein and Köhler won the 1984 Nobel Prize for medicine for their work

Mylotarg (gemtuzumab ozogamicin) was originally developed by Celltech and Wyeth. It was the first new treatment for acute myeloid leukaemia to come to market in nearly 15 years

Lumoxiti (moxetumomab pasudotox) brings the total number of ADC approvals to 5. The AZ drug is the first new treatment option for patients with hairy cell leukaemia in over 20 years

Collaboration will develop and commercialise Seattle Genetics’ ladiratuzumab vedotin, an investigational ADC targeting LIV-1, which is currently in phase 2 clinical Trials & development for breast cancer and other solid tumors

The promise and potential of ADCs is in their dual action of targeted killing. The compounds are comprised of a monoclonal antibody conjugated via a chemical linker to a potent cytotoxic drug, known as the payload. The antibody part of the ADC guides the therapeutic, binding to a specific target expressed on cancer cells – such as the proteins HER2 or CD30. The complex is internalised by the cell, where it is degraded – either by lysosomal proteolysis of the antibody and linker in the case of non-cleavable linkers or by environmental differences such as pH and specific lysosomal enzymes with cleavable linkers. This releases the cytotoxic drug, which kills the cell either by disrupting cell division by binding tubulin or by damaging the DNA. Essentially, the drug is a Trojan horse. ‘This highly potent approach allows for the targeted delivery of the therapy specifically to the tumour cells while sparing the healthy cells, unlike traditional systemic chemotherapy,’ the AZ spokesperson explains.

But the concept of ADCs has struggled, with the scientific complexity leading to several failures in earlier generations. This is because ‘early-generation ADCs encountered obstacles such as high toxicities and limited efficacy,’ the AZ spokesperson says. But recent scientific advances have made the area more tantalising to pharma. ‘Relatively recently we have seen extraordinary progress with newer-generation ADCs,’ the spokesperson says. ‘Impressive bioengineering across the industry, bringing together a combination of potent payloads, better linker technology and better identified targets that are a key in tumour growth, is transforming the ADC space.’

It’s simple arithmetic then for companies already in the crowded antibody cancer space or who want to open oncology’s money tap, explains Menon. ‘These newer drugs may get better in targeting diseased cells while sparing healthy ones,’ meaning the better the drugs are, the better the blockbuster potential, the greater the attraction to pharma.

The improvements are quite significant, explains Jenny Craigen, principal translational scientist at Cancer Research UK. There is an improved understanding of how to select the monoclonal antibodies based on properties such as antigen affinity and internalisation rates, rather than developing the antibodies from existing drugs, she says.

In the case of payloads, there are also improvements. These cytotoxic drugs, such as auristatins and maytansinoids, can be up to 1000 times more toxic than traditional anticancer agents and need to be inactive until released in the tumour cell. Early ADCs used more potent warheads but ‘the next generation utilises a wider range of payloads, many with significantly lower potency than the previous generation, which has been possible due to better understanding of ADC stability and aspects of design,’ Craigen says.

Take Immunomedics and Gilead’s Trodelvy (sacituzumab govitecan), approved last year, which contains a topoisomerase inhibitor irinotecan metabolite SN-38, says Craigen. ‘SN-38 is an example of a payload with a half maximal inhibitory concentration (IC50) in the nanomolar range that is lower than second-generation payloads, but the high drug-to-antibody ratio makes it possible to reach a sufficient drug concentration in cancer cells.’

This is where improved linker chemistry also comes in. In the past, unstable linkers led to the premature release of payloads and off-target toxicity. Instead of coupling reactions using the nucleophilic primary amino group of surface-exposed lysines or the thiol group of reduced structural disulfides to conjugate the linker to the antibody, Craigen says newer ADCs are using site-specific conjugation such as engineering side-chain cysteine residues or introducing non-natural amino acids. By controlling conjugation sites, this ensures more homogenous mixtures of ADCs, improves the drug-to-antibody ratio and stability, and minimises disruption to antibody function, Craigen explains. In short, they’re more effective drugs.

In the case of AstraZeneca’s Enhertu, the ADC takes advantage of the new science and features a novel payload and linker. It is comprised of the humanised anti-HER2 IgG1 monoclonal antibody trastuzumab, which is attached via a tetrapeptide-based cleavable linker to a topoisomerase I inhibitor payload, derived from exatecan. The drug carries about eight payloads, compared to most ADCs that typically carry two to four warheads. ‘Among the properties that make Enhertu a significant technological advancement is the high drug-to-antibody ratio and a linker that is not only stable in plasma and serum but is also cleavable upon being internalised into the cell,’ the AZ spokesperson says. ‘What’s more – and something we believe is unprecedented – is that in addition to killing the tumour cell where it has been internalised, this ADC can also target neighbouring tumour cells.’

The results in gastric cancer speak for themselves. Enhertu cut the risk of death by 41% versus chemotherapy in patients who had progressed on at least two previous treatments, including Herceptin (trastuzumab), and shrank tumours in 40.5% of patients, compared with 11.3% in those treated with chemotherapy drugs irinotecan or paclitaxel. Data also suggests the Enhertu-treated patients lived a median of 12.5 months versus 8.4 months with chemotherapy. ‘AstraZeneca’s strategy is to follow the science, and we believe that ADCs have significant potential across multiple tumour types,’ the spokesperson says. 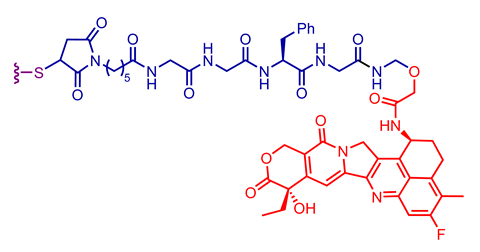 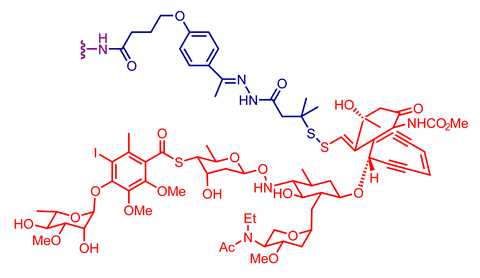 Developers in the ADC space are also relying heavily on outsourcing to contract manufacturers, because ADCs are complex to manufacture, requiring advanced manufacturing capacities including cell culture and synthetic chemistry. ‘Not all stakeholders in the industry possess end-to-end capabilities or infrastructure to support the design, development and manufacturing of [ADCs],’ Roots Analysis writes. The consultants estimate that 70–80% of ADC manufacturing operations are outsourced. ‘This trend is likely to persist in the coming years as well,’ they say, adding that they expect increased investment and capacity in the ADC manufacturing space as the science advances further.

Indeed, the science is progressing. The current limitations, including dose optimisation and penetration of solid tumours, for instance, are being reviewed and addressed. There is considerable activity into advanced conjugation chemistries, including branched linkers, with the aim to load multiple molecules of payload. Meanwhile, research into new cytotoxic drugs is ongoing, including small molecules, RNA polymerase inhibitors, proteins and enzymes. ‘Several compounds are in development based on pyrrolobenzodiazepine dimers, which produce highly cytotoxic DNA cross-links, and the first pyrrolobenzodiazepine-based ADC is expected to be approved in 2021 for the treatment of diffuse large B-cell lymphoma,’ says Craigen.

There is also active research around smaller delivery formats such as antibody fragments and other novel protein structures. In addition, ADC combination therapies are an emerging concept and studies are underway combining ADCs and immune checkpoint inhibitors and epigenetic modulators.

Ultimately, though, scientists will be aiming to enhance the therapeutic index of ADCs – either by improving the potency of the ADC to reduce the minimum effective dose (such as a high drug-to-antibody ratio) or by improving tumour selectivity to increase the maximum tolerated dose. Or, ideally, both at the same time.

The promise of these next-generation drugs is substantial, and it goes beyond the realms of cancer. Research is already underway into ADCs to treat inflammatory conditions, as well as cardiovascular, metabolic and autoimmune diseases. There’s even interest in antibacterials, with antibody–antibiotic conjugates using a rifamycin analogue to treat Staphylococcus aureus already in development. The market is there for the taking. If companies aren’t interested in ADCs now, they soon will be.