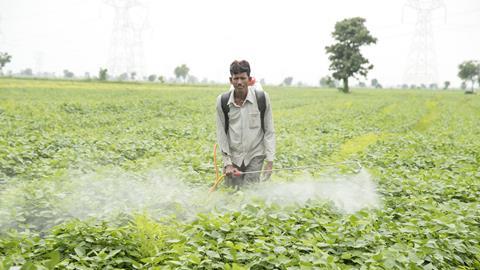 The northern Indian state of Punjab has moved to ban 20 pesticides. This comes as the nation as a whole is attempting to crackdown on pesticides that are most harmful to human health and the environment.

The pesticides banned include phosphamidon, endosulfan, triazophos, alachlor and monochrotophos. Many of these chemicals are banned in a number of countries but are still in use in many parts of India. The Stockholm Convention banned endosulfan in more than 120 countries in 2011, including India.

The state government said that the bans followed recommendations from Punjab Agricultural University in Ludhiana and the Punjab State Farmer’s Commission, a government body.

The restrictions were long awaited by environmental activists. Shivani Shah, a sustainable agriculture campaigner at the non-profit Greenpeace India, urged the government to issue a nationwide ban on all pesticides. ‘At the moment, the entire system of registration and use of pesticides in India is in shambles,’ she says. ‘It is critical for a nationwide transition away from pesticides altogether – and a move towards holistic agro-ecology practices.’

Ajay Jakhar, chairman of the Punjab State Farmer’s Commission, said that ’this is just a start’. ‘We’re just beginning to review harmful pesticides, and many more such chemicals could be banned in the future,’ Jakhar says. He pointed out that pesticides are approved by the central government in India. ‘States don’t have control over the process,’ Jakhar says, calling for more robust pesticide licensing laws.

Last year, over 45 farmers in the western Indian state of Maharashtra died from suspected pesticide poisoning – blamed on a number of products – while spraying cotton. Calls for tighter regulation for harmful pesticides picked up around the country after the deaths.

The World Health Organization classifies pesticides based on their acute toxicity. Class I pesticides are considered to be the most hazardous. Many class I pesticides such as monocrotophos, triazophos and phosphamidon are still in use in India, even though they are banned by other countries. According to an analysis by the non-profit Center for Science and Environment, around 30% of pesticides used in India in 2015 belong to this category.

The ban is significant as Punjab produces 19% of India’s wheat, and is often called the nation’s food bowl. ‘Punjab has responded well [to calls for regulation] despite the fact that it is a heavy pesticide use state,’ says Amit Khurana, a senior programme manager for food safety and toxins at the Centre for Science and Environment. ‘As the food bowl of the country, they have been historically dependent on pesticides.’ He adds that Punjab has set a precedent for other states.

In 2015, an Indian panel headed by an agricultural scientist reviewed 66 pesticides that were banned, restricted or withdrawn around the world. Consequently, the panel recommended a blanket ban on 13 pesticides, reviewing another 27 in 2018 and phasing out another six by 2020.

Based on the recommendations, the Indian agricultural ministry banned 18 pesticides in 2016. Thirteen of the bans are to be implemented this year, while the other pesticides are slated to be phased out by 2020. Khurana says 18 class I pesticides are currently used in India – only three of these will be banned in 2018. He adds that enforcement of pesticide regulation is a problem, as many unapproved pesticides find their way into fields.

In 2011, India’s supreme court banned endosulfan after aerial spraying was linked to neurological and congenital disorders in children in southern India. The decision came hot on the heels of the Stockholm Convention meeting in Geneva, where India agreed to join a global phase-out of the pesticide.