Researchers in the US have developed soft and stretchable devices that operate using ionotronic technology without the need for a liquid electrolyte. The work boosts the prospect of ionotronic devices being used in soft robotics, human–computer interfaces, wearable sensors and energy harvesting.

In ionotronic technology, ions are the charge carriers rather than electrons. Using soft ion-conducting materials such as hydrogels and polymers offers the prospect of inherently flexible circuits – and since most biological signalling also uses ions, it could be a route to creating interfaces between humans and machines. Previous studies into ionotronic devices have used hydrogels with salt water solutions to carry charges. But liquid electrolytes are prone to leak or evaporate when the devices are stretched or deformed.

A junction between polyanion and polycation layers forms an ionic double layer, creating a device that acts as a diode.

Now, Ryan Hayward and his team at the University of Massachusetts have developed ionotronic devices using stretchy ionelastomers that don’t require liquid electrolytes. ‘Our material relies on soft networks of charged polymers where the counterions are the only mobile species. In addition, our devices operate without requiring any electrochemical reactions, which can alleviate issues of long-term device instability,’ Hayward explains.

The team made two rubber band-like ionoelastomers: a polyanion and a polycation. In the polyanion, negatively charged sulfate groups are fixed to the elastomer chain while positive imidazole counterions are free to move. The reverse applies to the polycation – the negative ions are fixed but the positive ions can move.

This means each material conducts only positive or negative charge, similar to the way p- and n-type semiconductors transport holes and electrons respectively. The materials can therefore be combined to create ionic analogues of semiconductor electronic components. For example, a junction between layers of opposite polarity acts like a diode, allowing current to pass in one direction but not the other. 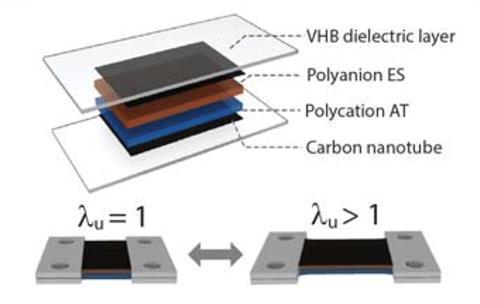 A transducer device could harvest mechanical energy on being stretched and compressed.

The team also created a transistor by sandwiching a polycation layer between two polyanion layers. A third device was able to harvest mechanical energy that was produced when stretching and compressing it.

‘This represents an important next step for iontronics,’ says Daniel Frisbie who investigates semiconducting devices at the University of Minnesota, US. ‘Combining ionic conductivity with elastomeric properties in a single material is the creative aspect of this work that opens up new possibilities, for example in soft robotics or human–machine interfacing.’

Hayward suggests that the range of ionic species that could be used as charge carriers offers further scope for invention. ‘Attaching other functionalities that influence optical characteristics, surface energy, or even bioactivity … would allow the properties of the material to be electronically switched,’ he explains.