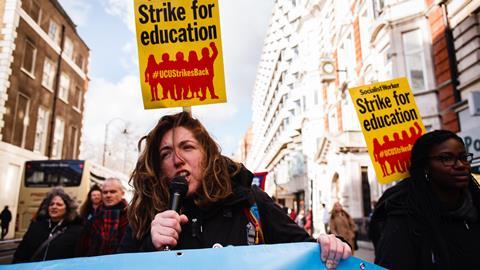 Almost every university in the UK will face three days of walk outs later this month after members of the University and College Union (UCU) backed strike action. Strikes are expected to take place at every single university in the country that has a chemistry department. The strikes are a significant escalation in an ongoing dispute over pay and working conditions, as well as pension cuts affecting staff at the country’s academic institutions.

‘Campuses across the UK are about to experience strike action on a scale never seen before,’ said UCU general secretary Jo Grady in a statement. ‘70,000 staff will walk out and make clear they refuse to accept falling pay, cuts to pensions and insecure employment.’

UCU members voted in favour of the strikes in a ballot held in October. The union notes that since the ballot no improved offers have been forthcoming from universities, so it intends to proceed with strikes. The strikes will be held on 24, 25 and 30 November at 150 universities across the UK.

UCU says it wants academic staff to receive ‘a meaningful pay rise to deal with the cost-of-living crisis’, as well an end to the use of insecure contracts.

According to the union, a third of academic staff are on temporary contracts and pay rises in the sector have failed to keep up with inflation for over a decade. University staff received an average pay rise of 3% this year – although the Universities and Colleges Employers Association (UCEA) notes that the lowest paid staff received a pay rise of 9%.

However, UCU argues that with UK universities generating a record £41.1 billion income last year, and a surplus of £3.4 billion, ‘the sector can more than afford to meet staff demands’. This surplus is unevenly spread though, with half generated by just the Universities of Oxford and Cambridge.

Responding to the announcement, UCEA chief executive Raj Jethwa noted that while higher education institutions are not planning any further increases to current pay, they are considering bringing forward next year’s pay negotiations.

‘Any threats of industrial action will do nothing to support students, staff or the many higher education institutions working hard to avoid redundancies or maintain staffing levels, having delivered the August pay uplift,’ said Jethwa. ‘UCU needs to provide its members with a realistic and fair assessment of what is achievable before encouraging strike action directed at students once again.’

Jethwa went on to highlight that all universities are facing significant cost increases with most experiencing a drop in real terms income. ‘Higher education institutions want to do more for their valuable staff, but any increase in pay puts jobs at risk,’ he added.

The National Union of Students (NUS) has backed the strikes, with vice president Chloe Field noting that the action will mark ‘the fifth year in a row that government cuts to education and workers’ rights have resulted in strike action’. ‘In that time, staff and students have stood together in the fight for better pay and conditions for all university staff, including the thousands of postgraduate students on increasingly casualised contracts,’ she added.