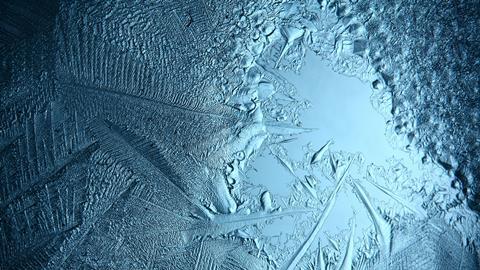 Ice has fascinated and frustrated scientists for centuries and two recent studies confirm this is unlikely to stop anytime soon. Early last year Thomas Loerting and colleagues at the University of Innsbruck, Austria, reported that they had found hydrogen ordering in acid-doped ice VI samples cooled at high pressure.1 The team claim their results point to a new phase of ice, temporally calling it ice β-XV. However, Christoph Salzmann, of University College London, UK, and colleagues say that Loerting’s team has overstated the results and instead found an example of ice in a deep glassy state, once again illustrating how convoluted water chemistry is.2

Ice can take on many different forms, and there are currently 17 known crystalline phases. Some of these phases contain hydrogen atoms in an ordered form, and some contain hydrogen atoms that are in a disordered form. Since the discovery of ice VI, a hydrogen disordered phase, it has been suggested that there are as many as 45 symmetry-distinct configurations of this type of ice. Back in 2009, Salzmann and his group managed to prepare a hydrogen ordered form of ice VI that they named ice XV, using an acid doping method that slowly cooled the sample at ambient pressure.3

Loerting and his group did a similar thing to Salzmann but used higher pressures – they saw low temperature endotherms. An endotherm indicates that the surroundings have absorbed heat. Loerting assigned this low temperature endotherm to the phase transition of a new hydrogen ordered phase of ice VI; A phase they say is more ordered and thermodynamically stable than ice XV, so therefore distinct and different from it. ‘All of these findings clearly show that it has to be ordered,’ comments Loerting. He says that further work, including neutron diffraction studies using deuterated samples, can confirm the crystal structure of this new phase. And after preliminary studies with deuterated samples that have been left for extended reaction times, the group stand by their conclusion that they have found something different from the previously prepared ice XV. They plan to follow up with more results on this in the future. 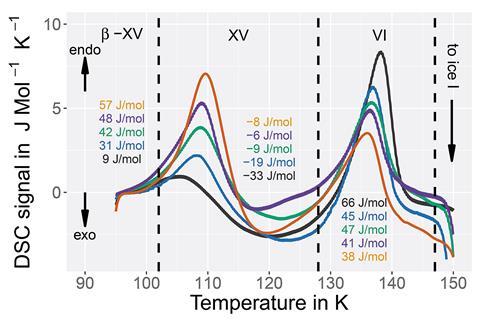 Loerting’s team says the endotherm at ~103K is a phase transition and does not appear upon heating ice VI or ice XV. They say this implies that the new polymorph cannot be pure ice VI, pure ice XV or a mixture thereof

Salzmann’s team carried out their own characterisation studies to corroborate Loerting’s findings. They prepared, and cooled at high pressure, a deuterated acid-doped ice VI sample, which showed that the neutron diffraction pattern of this sample is consistent with it being a deep glassy state of ice VI, rather than crystalline structure. A deep glassy state is a glass state that is low in enthalpy, and is characterised by relaxation dynamics that are very slow. It’s ‘a very nice example [of a deep glassy state],’ comments Salzmann. ‘We’ve shown that the system is actually much more complicated.’ As Loerting did not include neutron diffraction results in their study – the gold standard in crystal characterisation – Salzmann says their initial conclusions are incorrect and not fully supported. ‘[The D2O work] really cemented our interpretation of what is going on,’ adds Salzmann. 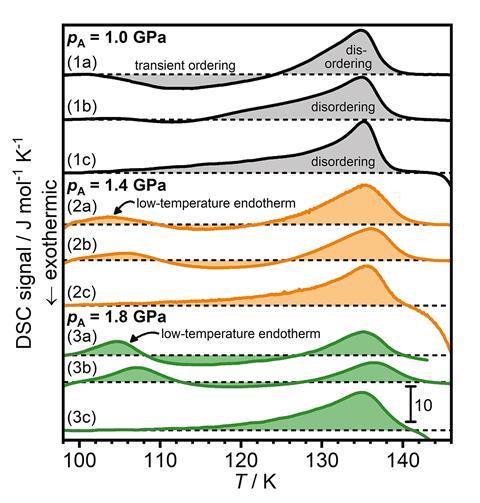 Salzmann says the gradual appearance of low-temperature endotherms upon increasing the pressure from 1.0 to 1.8GPa indicates that cooling at higher pressures leads to deeper glassy states

Dennis Klug an ice physics researcher at the National Research Council in Canada says ‘the controversy between these two studies demonstrates the very high interest and importance in understanding the properties of water and water ice structures.’ He explains that both teams have made a significant contribution to the field; Salzmann’s work shows that a significant amount of evidence is required to completely define a new structure, whilst Loerting’s opened up the idea that other ice structures with stable local ordered regions that are not fully compatible with crystal structure constraints are possible. ‘The search for new structures of ice will definitely continue.’