Taking the heat off ice under pressure 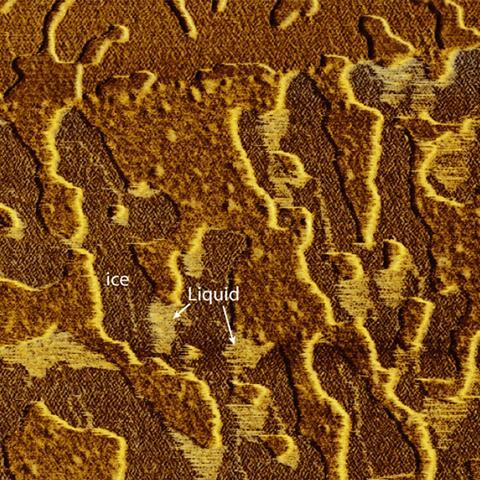 Under pressure ice can start to melt. This work has begun to probe the process and provided images of the transition from ice to a quasi-liquid state when it is put under very high pressures

Researchers have developed a way to shield ice from heat to better understand how it melts and refreezes when pressure is applied and then removed. The approach could yield fresh insights into the role of pressure-induced melting in physical processes including glacier movement, corrosion and lubrication.

The thawing and refreezing of ice due to pressure has fascinated scientists for centuries. A 19th century experiment by James and William Thomson, better known as Lord Kelvin, involving the passage of a wire through a block of ice that remains intact has become a textbook staple and fun classroom demonstration of the process. However, as well as pressure, other thermal effects such as heat conduction and friction contribute to the process, so it’s difficult to determine the exact role of pressure.

Now Kai Sotthewes and Pantelis Bampoulis and their colleagues at the University of Twente in the Netherlands, have used graphene to channel heat away from a single two-dimensional layer of ice in order to fully explore how pressure induces melting. ‘Our work adds to Thomson’s experiment by extending it to two-dimensions and confined ice, and goes one step beyond by decoupling environmental influence,’ says Bampoulis.

The team first sandwiched a layer of water between the mineral muscovite and graphene. Muscovite mica is hydrophillic so it allows a film of water to immediately form when exposed to air. When graphene flakes were placed on top, the water was confined and thermally isolated from the environment due to graphene’s conductive properties. The samples were then exposed to low relative humidity, causing evaporation and subsequent heat loss, which turned the water to ice.

Scanning probe microscopy was used to image the trapped ice crystals while an atomic force microscopy tip provided a high and tunable external pressure. At room temperature, the team discovered that the ice melted into a quasi-liquid phase due to pressure alone at around 6 gigapascals and above, which is almost 60,000 times that of atmospheric pressure. When pressure was removed, the water refroze. Further experiments revealed that the critical pressure required to melt ice decreased when samples were subjected to higher temperatures.

To the researcher’s surprise they also found that the quasi-water layer was slightly thicker than the layer of ice. ‘This minute difference of only 70 picometres is attributed to a polarisation of the water molecules in the ice, while orientational disorder and changing OH bonds in water lead to a slightly higher thickness,’ explains Sotthewes.

‘Separating pressure from the temperature effect on ice melting is by no means an easy feat for confined ice,’ says Xiao Zeng, who investigates the chemistry of water and ice at the University of Nebraska-Lincoln, US. ‘I was particularly excited by their observation of a quasi-liquid layer, a phenomenon also seen in our earlier computer simulation but controlled by temperature.’