Study reveals which countries’ researchers work through their holidays

Academics are renowned for working long hours but exactly how often they work on holidays and at weekends has now been revealed. The study examined when manuscripts and peer reviews were submitted to two medical journals to uncover how likely scientists are to work outside of office hours – and which countries’ researchers struggle most with work–balance.

Long working hours and time spent preparing manuscripts for publication are common complaints in academic circles. Heavy workloads were at the heart of strikes that affected 60 UK universities earlier this month.

Now, researchers in Australia and the UK have attempted to quantify how often academics around the world carry on working late into the night, and even into weekends and holidays. They analysed the time when almost 50,000 scientific articles and 76,000 peer reviews were submitted to the The BMJ and BMJ Open over the last eight years. 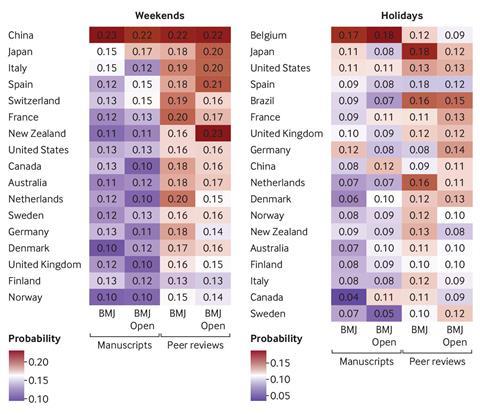 Out of hours work was strongly correlated with country, which the researchers behind the study say means that ‘a “culture of overwork” is a literal thing, not just a figure of speech’. The study found that scientists in Belgium were the most likely to give up their holidays to finish off that important paper, while researchers in Canada were the most likely to switch off over national breaks.

The researchers who carried out the analysis noted that submitting a paper is the last step of a long process – this means that while a paper might be submitted on the weekend, the majority of the work that went into it could have been done during office hours. They also point out that different working cultures in other fields might reveal different paper-writing habits.

While they expected to see an increase in the proportion of papers submitted in non-working hours, reflecting increasing pressures on academics’ time, no such change was observed over the period.