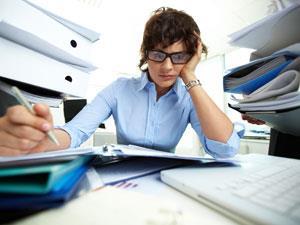 A new study has found what many already know – that when the sun goes down researchers don’t go to bed, but continue working on into the wee small hours of the night. And many of them also carry on working through the weekend too.

‘In the science community, achievements always correlate with hard work,’ according to a paper written by a team of Chinese researchers, who have been following the working habits of scientists around the world. ‘Motivated by the pressure of competition from all over the world, most scientists today are living and breathing their work.’

In the Chinese study, researchers at Dalian University of Technology used a ‘novel method’ to monitor researcher work habits. They analysed global downloads of scientific papers from the German publisher Springer Verlag, which provides real time download information on its website Realtime.springer.com.

The team monitored download data in April during the working week and over two separate weekends, dividing each day into 144 slots of 10 minutes. The researchers focused on the three biggest downloaders: the US (29.6% of total), Germany (15%), and China (9.6%). The UK came in at fourth place with 3.9% of total downloads. 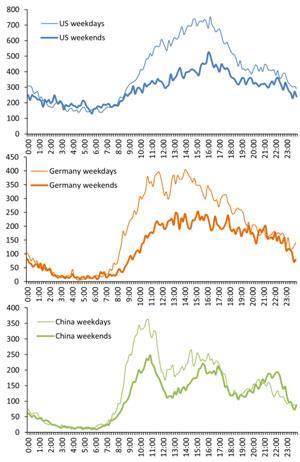 Chinese scientists are more likely to be downloading papers at weekends than their counterparts in the US and Germany.

Unsurprisingly, downloads in the three countries slowed down during the night and on weekends, but never ceased. However, scientists in the US were most likely to be working through the night, with post-midnight to sunrise downloads remaining between 100 and 300 downloads for each 10-minute time slot, compared with the weekday late afternoon highs of around 700 downloads. Downloads in Germany and China generally tapered off sharply after midnight to below 50 downloads every 10 minutes until sunrise.

Lead author Xianwen Wang says the large number of downloads during the night and on weekends was ‘quite beyond my expectation’. Although his team only relied on Springer download data for the study, he thinks data from other global science publishers would show a similar trend.

But isn’t it possible that scientists are simply downloading a few papers while otherwise relaxing surfing the internet? ‘I think if a scientist is downloading papers he is working,’ says Wang. ‘If he is watching YouTube videos and downloading papers at the same time, then he is also working.’

Brian Bishop, vice president of platform development at Springer, says that over 400 million downloads have been recorded since the real time website was launched in November 2010. Watching the downloads blinking on and off on the map all over the world ‘supports the thesis that scientists keep non-traditional work hours,’ he says. ‘I think this is unsurprising given the non-traditional types of environments that these scientists operate in and the level of personal investment that most of them have in their research topic.’

The researchers attribute this night time and weekend work to the ‘intense competition and pressure’ for scientific achievements, adding: ‘Scientists today are spending much more time working than initially intended. They are deprioritising their hobbies, leisure activities and regular exercises, which negatively influences their mental and physical health. Meanwhile, engagement in scientific research after work directly leads to the ambiguity of the boundary between home and office.’

Jerry Jacobs, a sociologist and president of the Work and Family Researchers Network Team at the University of Pennsylvania, US, says the study ‘represents a clever use of an unobtrusive measure of time use’. He was struck by the relatively high levels of weekend and night time downloads, compared with weekday daytime levels. ‘My interpretation is that faculty are most likely to conduct online searches and downloads when they have free time and are unlikely to be interrupted,’ he says. ‘During the day, researchers have meetings, are working in their labs, are teaching, running errands, and so on. This makes nights and weekends a particularly good time to engage in this particular activity.’

While people working in other professions also bring work home, Jacobs says ‘the nature of scientific work is different from these other professions. There tends to be more flexibility, that is, more control over one’s time. But there is also the sense among faculty that their jobs are never done, that there is always more to know.’