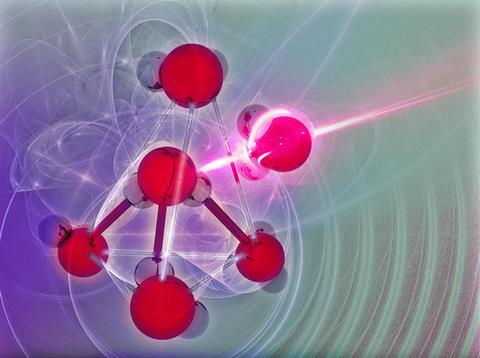 US researchers have entered a ‘no man’s land’ where water exists in states that scientists have struggled to access, retrieving clues that may support a controversial idea.1

The team at Pacific Northwest National Laboratories (PNNL) in Richland collected data on two water states from 135–245K, far below where water would usually become ice. What they found could accord with a much-debated theory to explain water’s many strange properties, such as the fact that its density doesn’t increase as it cools like other liquids. This theory calls for high density and low density liquid phases, and the effects of thermal equilibrium between them. Although this latest study doesn’t investigate density, the two states it investigates imply such an idea has promise, comments PNNL’s Greg Kimmel. ‘It makes sense to talk about those equilibrium arguments,’ he says. ‘We didn’t know that before.’

Scientists who have previously cooled water well below its freezing point found that its strangeness increases, with its heat capacity soaring below 250K, for example. Extrapolating from this, they suggested some kind of dramatic transformation might happen. At a critical point around 228K, the high and low density states could combine into one single state. ‘But nobody could get to 228K because the ice in the water always crystallised,’ Kimmel explains. Researchers could study water in liquid configuration down to around 235K, and below 160K, but between laid a ‘no man’s land’.

Using a unique setup, Kimmel and his colleagues have been doing experiments in this previously inaccessible range for several years. They use thin films of water on a centimetre-diameter, millimetre-thick, single crystal of platinum in ultra-high vacuum at 20K. They can rapidly heat the water using nanosecond laser pulses, raising it to temperatures from which it rapidly cools without crystallising. In 2016, the PNNL researchers used the technique with a layer of ice on the platinum crystal, finding no dramatic transformation in liquid water’s diffusion coefficient.2

Now, they have heated the ice film on the platinum crystal at 136K to create low density amorphous ice, where molecules freeze in place but keep their liquid-like configuration. Consequently, despite being called ice, the PNNL researchers consider this form a liquid. Heating water up to 297K and then cooling it creates what they call ‘hyperquenched water’, a more conventional liquid form.

Kimmel and colleagues studied these two extremes using standard infrared spectroscopy after the samples had cooled back to 70K, reflecting infrared light off the platinum crystal and detecting absorption. They tracked progress between one form and the other by heating the water film to one temperature after another, effectively making a stop-motion film of the transition. The IR spectra showed that between 170K and 245K there was always a mixture of hyperquenched water and low density amorphous ice. There was no critical point at atmospheric pressure. The spectra also showed that structural changes were reproducible and reversible, meaning the states were in thermal equilibrium.

Qiang Sun from Peking University, China, says that the findings ‘may be useful to understand the anomalous properties of supercooled water’. He suggests that what it says about the low density water phase could help understand the relationship with the nucleation process, the very first step of crystalline ice formation.

According to Kimmel’s colleague Bruce Kay, the principal value of these results is ‘to test, validate and refine theoretical models’. Kimmel speculates that they might help improve how climate models simulate cloud formation. ‘The growth and nucleation of clouds happens in the upper atmosphere at very cold temperatures,’ adds Kimmel. ‘The crystallisation rate of supercooled water is believed to be quite important.’