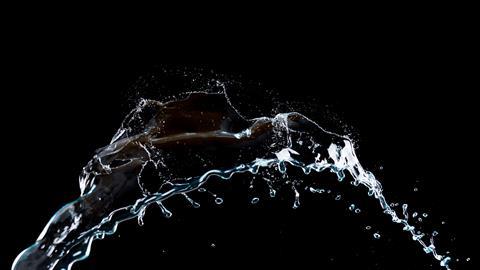 Scientists in Germany have proposed a definitive answer to a longstanding debate in chemistry: how much hydrogen bonding exists in supercritical water? The answer, they say, is ‘None at all’.1

Water’s dynamic, three-dimensional network of hydrogen bonds, linking each water molecule to four others on average in a tetrahedral arrangement, makes it special as a solvent and a medium for life. This structure is lost when water is heated above its critical point of 374°C, but it hasn’t been clear how much of the hydrogen-bonding still survives. Some neutron scattering studies have suggested that supercritical water is more or less devoid of such bonds,2 while NMR studies have seemingly indicated that more than a quarter of the hydrogen bonds in normal liquid water survive just above the critical temperature.3 One recent review insists that some of these bonds do persist in those conditions.4

The question is not just academic. Supercritical water, in which the distinction between liquid and vapour is lost, is sometimes used as a solvent for industrial chemical processes such as the production of biofuels, because it is able to solvate substances that would not readily dissolve in the liquid, such as gases and nonpolar compounds. And the water around some deep-sea hydrothermal vents exists in a supercritical state, thanks to the high pressures and the volcanic heat of the vent. 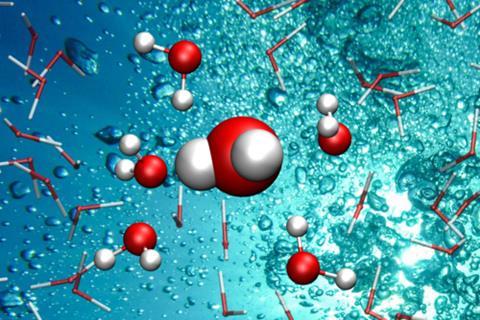 A snaphsot from the simulation (with the central, larger water molecule as the reference point) shows the tetrahedral arrangement of water molecules normally present in liquid water is completely absent in the supercritical state

Quantum chemists Philipp Schienbein and Dominik Marx of the Ruhr University of Bochum have now investigated the matter from first principles, using molecular dynamics simulations that incorporate the quantum-mechanical aspects of the bonding within and between water molecules. Such calculations are computationally very demanding, but the researchers were able to look at the dynamics of 128 water molecules – enough to see bulk-like behaviour – over a timescale of 20 nanoseconds, which is many thousands of times longer than the lifetime of a typical hydrogen bond in the liquid. They check that the simulations are giving realistic results by comparing their predictions for terahertz-frequency spectra (which can probe the vibrations of hydrogen-bonded pairs of molecules) and NMR relaxations times (which probe individual molecular rotations) against those seen experimentally.

They conclude that the supercritical fluid contains no hydrogen bonds worthy of the name. It’s not that the molecules don’t ‘feel’ each other, the duo say – but the interactions between a hydrogen atom on one molecule and the electron lone pairs on the oxygen of another don’t last long enough to warrant calling it a bond. Above the critical temperature, such links typically break in about 78 femtoseconds (10-15s) – less than half the oscillation period of any putative hydrogen bond.

‘A bond is something that should support at least one vibrational period,’ says Marx, ‘and we show that this is clearly not the case for hydrogen bonds in supercritical water.’ Such bonds might nevertheless appear to persist to methods such as NMR and neutron scattering, which see only time-averaged behaviour of the molecules.

What’s more, even though the terahertz spectra seem to reveal a certain ‘stickiness’ between molecules that can make the motion of one of them dependent on another, the researchers say this feature can be fully described by van der Waals attractions between the molecules – which, unlike hydrogen bonds, have no preferred direction in space. ‘We show that features that could (and have) been interpreted at first sight as being signatures of hydrogen bonding are due to short-lived encounters due to collisions,’ says Marx.

They may be fleeting, but [the hydrogen bonds] definitely contribute to the system’s configurational energy

This lack of real, long-lived hydrogen bonding, say Schienbein and Marx, ‘is the fundamental reason why supercritical water is a distinctly different solvent [from] ambient liquid water.’

What is a bond?

‘These impressive calculations provide new insights on just what is the nature of a supercritical fluid,’ says Richard Saykally of the University of California at Berkeley, a specialist on the molecular properties of water. ‘The real answer is a complicated one,’ he says, involving considerations of the timescales of molecular motions and the forces between them. But it ends up with a simple generalisation that, for water, “when the average oxygen–oxygen oscillation period in the liquid is less than that of the intermolecular vibration, the liquid should not be considered to be hydrogen-bonded”, he says.

What deserves to be called a bond, however, is still up for debate. While praising the technical quality of the work, physical chemist Pablo Debenedetti of Princeton University says he is not fully convinced by the interpretation. If one sticks to thermodynamic arguments, he says, ‘using reasonable energetic criteria for counting hydrogen bonds one gets a non-zero number of such bonds per molecule in supercritical water. They may be fleeting, but they definitely contribute to the system’s configurational energy.’

Fabio Bruni of the University of Rome III agrees that the basic issue is when a bond is really a bond. These very weak interactions, he says, might be better regarded as a ‘statistically significant approach of two water molecules’ – and he says the work shows how they could ‘appear in two quite different ‘shapes’ if investigated by techniques or computer simulations that probe the dynamics, compared to time-averaged techniques such as neutron diffraction.’